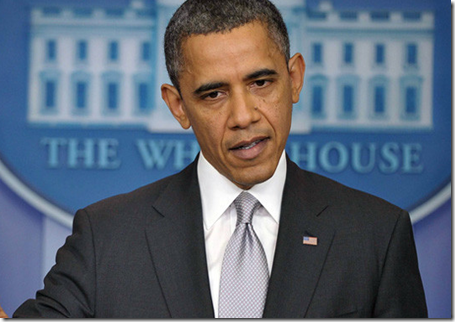 President Obama addressed the nation today at around 1:45 PM Eastern. He said:

“It appears that an agreement to prevent this New Year’s tax hike is within sight…but it is not done. There are still issues left to resolve but we are hopeful that Congress can get it done….but it’s not done. And so part of the reason that I wanted to speak to all of you today is to make sure that we emphasize that to congress and that members of both parties understand that all across America this is a pressing concern on people’s minds. “

The president then laid out the tentative agreement as it currently stood in negotiations.

The president said his preference would have been to solve all the problems in the context of a larger agreement that solved the deficit problem in a balanced way so that all focus would be off of this type of negotiating and on to policies to fix the economy. He then took a justifiable swipe at Congress stating

“But with this Congress that was obviously a little too much to hope for at this time.”

He said the country’s fiscal problem will likely have to be done in steps. He said the current agreement will ask the top 2% of Americans to pay more in taxes, the first time in two decades. He also said previous agreements had already instituted many cuts.

The President implied that the sequester that used an ax instead of scalpel for automatic spending cuts is still being worked on. He said he is willing to cut Medicare by finding efficiencies but it must go hand in hand with closing loopholes in the tax code to make it fearer.

He admonished the Republicans by stating that the budget deficit will not be fixed by spending cuts alone. He said he would not allow cuts that hurt seniors, students, or middle class families without equivalent sacrifices from millionaires or companies with a lot of lobbyist. This may imply that down the road he is willing to entertain more cuts to the safety nets than his base will stand for, as marginal decreases in benefits for the middle class is much more painful than marginal tax increases for the wealthy.

Ultimately he implies that this bill will only cover the tax and benefits side of the fiscal cliff and not any grand bargain that looks at the totality of the structural inequities in the tax code and social policies.