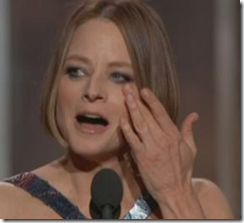 Jodie Foster accepted the Cecil B. Demille award at the Golden Globes Sunday night. At the ceremony she came out as being gay without once actually saying it.

She simply said she is now single, spoke about her female partner, and implied many already assumed

After listening to the touching six plus minute speech where she spoke about privacy and loneliness and now being signal one had to wonder if she made a concerted effort not to say  “I AM GAY”.

That is her choice. Entertainment writer and editor Deb Baer wrote a blog on HuffPost titled “Why I’m So Angry About Jodie Foster’s Coming-Out Speech “ where she  said:

So Jodie Foster finally admitted that she’s gay (though she never actually said the word) at the Golden Globes, and of course her worst nightmare — a bazillion pieces like this one, dissecting her private life and proselytizing about her bizarre speech — is coming true. Well, too f***ing bad, Jodie! There wouldn’t be any pieces written about it now if you’d just been brave enough to come out a long time ago, like the rest of us.

It is Jodie’s right to be private. She does not owe the gay or straight community a reason for her to discuss her sexuality. She did it her way in a manner she is comfortable with. It is her business. After all in this political climate, the mischaracterization of homosexuality impacts differently.

Deb goes on to say:

Nobody was asking Jodie to be president of the gays. Ellen is a great example of someone who came out, had no interest in being the poster child and is just living her life honestly and openly. Though she occasionally fights publicly for LGBT causes, being a lesbian doesn’t define her. But here’s the amazing thing that happened to Ellen. At first her big announcement seemed to derail her career. She disappeared for a while and almost gave up on show business because she was "mired in depression." After some dark days, which a lot of newly out people experience, Ellen ultimately was rewarded for being her true self.

The fact is that her criticism is asking Jody to do just that. She wants her to use her prominent position to come out. Is this a request being made of politicians, of the millions that work in corporate America or elsewhere? Every person’s situation is distinct and every person has the right based on their circumstances to deal with it accordingly.

Jody Foster should be commended for coming out in her own way on such a large stage. A revered actress like her is a net positive in that for  those who are not aware, a book cannot be judged by its colors. The next person you are talking to, that person that you like for just being, just may be gay.