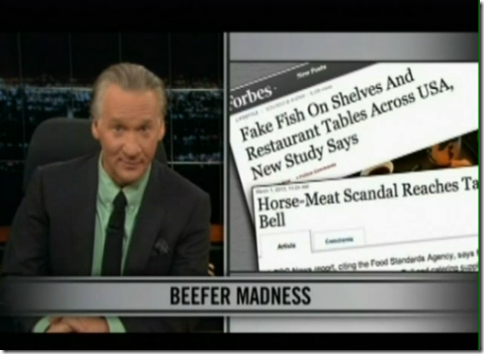 Bill Maher had a rather important New Rule on food today. Because it was so funny, many will miss the dual message.

The first was the necessity for regulation not only on food but for the burning of coal. The second was an environmental message.

Unlike times when his rants seem a bit overdone with his attacks on our food being poison (high fructose corn syrup, GMO, insecticides, and other chemicals), this rant had a prescient point.

Bill’s opening remark puts the onus on the citizen.

If you are one of the millions of Californians who voted against labeling genetically modified food, you can’t complain when it turns out there is horse meat in your hamburger.

He goes on to make the case that much of the food being eaten is mislabeled, in a funny and satirical manner.

Did you know your Chilean sea bass is neither Chilean, nor bass, nor from the sea? …. And your Mahi-Mahi is really made of mercury drenched bottom feeders like tile fish …. And if you like sushi, you really don’t know what you are eating because those fish are mislabeled 74% of the time.

He then proceeds to show that many countries we will view as not as advanced in food safety, actually require precise labeling (e.g., Saudi Arabia, China, Japan). He then proceeds to use reverse reasoning for America’s failure to take food labeling & safety as serious as it should.

It’s actually a good thing America don’t care what they put in their mouth. Because in the future, thanks to overpopulation, and overfishing, and global warming, and Chris Christie, we are running out of the food we do like to eat… You know why there is so much fish mislabeling now? They don’t have the heart to tell you the fish you like are gone…. You know where fishermen can no longer find cod? Off of Cape Cod.

Enjoy eating your chemically process crap now America because it won’t be long before lunch is dung beetles and soylent green, and when all that runs out, I am afraid it’s Papa Johns.