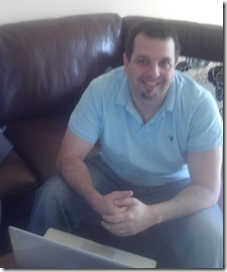 Cameron Michaels is a United States Army veteran. He is a devoted father, husband, son, grandson, entrepreneur, and political activist. He is an alumnus of the American Boy Choir School, environmentalist, a bagpiper, singing waiter, and chef. He wants to see America be all that it could be and was meant to be.

Cameron Michaels has been a member of Coffee Party for some time now. He was instrumental in Coffee Party’s new Internet and Social Media Infrastructure that is leveraging the Coffee Party base to have material impact on politicians in Washington and throughout the United States of America. Cameron blog is Poliblogz.com. Cameron says:

I am in favor of nationalizing elections, taking what works from around the globe and incorporating them here at home, and supporting the reformation of the tax code, repeal of the 17th amendment, term limits and resetting the governance of the limited scope of the FED under the treasury. 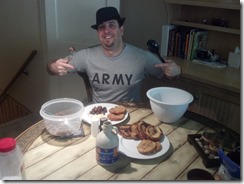 Coffee Party met this weekend in Washington DC for their annual board meeting. Board members used their frequent flier miles, their own cash, borrowed cash, and the combination thereof to make the trip. As good stewards of the monies donated by the patriotic donors to Coffee Party, one large house was rented for the “un-retreat” and in lieu of going out to breakfast, lunch, and dinner, all meals were prepared in the house. Board members put their monies together as Frugal Gourmet Cook Cameron Michaels and our facilitator & moderator Michael Charney (our outspoken conservative) went shopping for groceries. 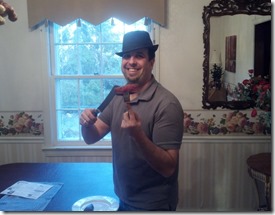 Cameron promised he would be the cook. We took him at his word. We did not go wrong. Mr. Michaels has earned the title “Coffee Party’s Frugal Gourmet” as he turned our groceries sometimes with the assistance of Marcelle Cashon, wife of At-Large Director John Cashon, into wonderful tasteful meals.

I felt compelled to share our Frugal Gourmet’s meals with the Coffee Party family and the “Coffee Party family in waiting” at large, our prospective members. Cameron made the frugality of our stay bearable with the expectation of tasty meals every day.

The entire board arrived on Thursday evening, tired from traveling. Folks came from as far east as New Hampshire, New Jersey, the Midwest (Illinois), Texas, Kentucky, and the west (California, Oregon). Friday’s and Saturday’s breakfast were ad-hoc as we had to get right into the board meetings. 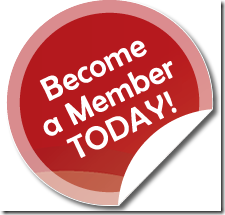 As we met, our Frugal Gourmet would keep his eye on the cooking during our short breaks. On Friday we had a great sausage with pepper for lunch with healthy salads and a few other fixings. The flavors attacked the palate. On Friday evening Cameron made a chicken dish with special gravy that was so good many had it for breakfast the next day as well as lunch. Cameron watched Coffee Party President, Eric Byler, give up on watching his figure by consuming three helpings.

On Saturday, Cameron grilled steaks with a tasty sauce that rivaled any steakhouse in America. The salads were just as tasty with the combination of greens and fruits.

Cameron has promised to provide recipes for his meals and he  has released the most important one. The recipe below is the one that we all ate and ate.

A subsequent blog will be released detailing the Coffee Party Board meeting. Suffice it to say this was one of our best board meetings to date that is ready to move Coffee Party to the next level.

Then put in the wine and mushrooms till it starts to boil lower the heat to half.

Add in the salt and sugar and balance the sauce till its just the right balance of flavor.