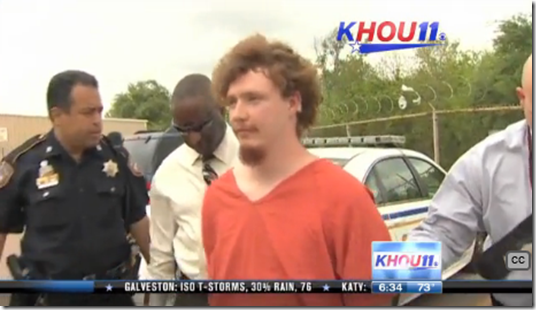 The violence in America continues. Another student, this time at Lone Star College in Texas attacked fellow students. Fourteen students were injured. It seems this is yet another student with some sort of mental problem. KHOU reported that

In the confession, 20-year-old Dylan Quick reportedly told detectives Tuesday’s attack was part of a long-held “fantasy” he had since his childhood.

“In a videotaped confession, he admitted he stabbed the complainants with an X-Acto knife and a scapula [sic] because of his fantasy to kill people,” said a prosecutor. “Apparently there are more than six complainants, and a bloody knife tip was removed from the chest from one of the complainants.”

The charges against Quick were read in court, but he wasn’t there out of concerns over his mental health. Quick has been charged with three counts of aggravated assault.

The student is accused of going on a stabbing spree at Lone Star College’s Cy-Fair campus, injuring at least 14 people.

The sheriff's said Quick told investigators he'd had fantasies about stabbing people to death since he was in elementary school, and Quick indicated he'd been planning the attack for some time.

I was having coffee with Marc Croes, a liberal friend of mine and community activist. He said he received an email from one of his conservative friends stating “I am waiting for the liberals to introduce knife control legislation!”. Marc answered, “There were 14 injured in Texas’ knife attack today. A few hours earlier, 13 died in shooting spree in Serbia. I'm just saying.”

While Marc’s exchange was rather amusing on the surface, it has a very important message. It provides a real life example of the outcomes depending on weapons used.

Opponents of gun control love to counter that if there are no guns people will still find a way to effect their killing. That is absolutely true; however the magnitude is that much less.

Most students were able to run away from the knife wielding student. It is hard to outrun a bullet. Multiple students were able to position themselves in order to jump the attacker and subdue him. How many must be shot before one can jump to subdue a gunman with multiple guns with extended magazines.

This Texas incident should be used as a catalyst to illustrate why sensible gun control is necessary. We cannot stop crazy people from attempting to do harm.

Full background checks will catch a percentage of the mentally impaired or the criminals trying to get guns legally. Making the sale of extended magazines illegal will reduce the amount of carnage as the opportunity to subdue the gunman during a magazine change comes much quicker. There other helpful controls like a waiting period that may allow a suicidal person to reconsider.

We cannot take guns away from everybody. We cannot stop all people that are attacked either with a gun or other weapons from possibly dying. We can however pass laws that minimize that possibility while ensuring that those who want their constitutional right to bear arms are honored.