This is a sad story of the city where many of my folks still live in. It is interesting that I remember the very building in the picture. In my days in was a huge apartment building with a French façade and well painted.

It got worst every single year that I returned to visit. What is amazing is Colon and the Atlantic side, the Caribbean side of the country is actually the most beautiful part of the country from a natural and geographic point of view. The problem is the reality of living in the Caribbean basin whether it is Colombia, Costa Rica, Honduras, Venezuela, Honduras, or other countries within, there is implicit and explicit racial discrimination by the very few in power. They keep two separate underclasses. The better off underclass can at least feel they are not as bad off as those on these coasts. 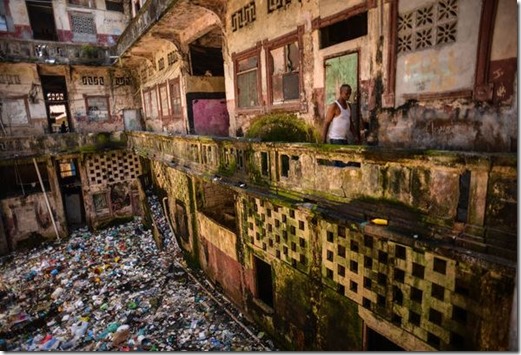 COLÓN, Panama — On one end of the Panama Canal, the nation’s capital gleams with new skyscrapers; a subway, the first in Central America, is under construction; and new malls and restaurants fill with patrons. The city fancies itself a mini-Dubai on the Pacific.

Forty miles away on the other end of the canal, in the city of Colón by the Caribbean, rotting buildings collapse, sewage runs in alleyways, water service is jury-rigged, and crime and despair have sent protesters into the streets. Recently, Hollywood filmmakers made Colón, Panama’s second-largest city, a stand-in for Haiti, the poorest country in the hemisphere.

Panama is booming, with an average economic growth of 9 percent in the past five years, the highest in Latin America. Banking and financial services and big public works projects like the subway and multibillion-dollar expansion of the canal have fed the good fortune.

Panama City, the capital, has the tallest building in Latin America, a 70-story Trump hotel and condo tower, and its skyscraper forest reflects the rush of foreign investment, real estate speculation, well-heeled foreign transplants and, American officials have said, some measure of drug money.