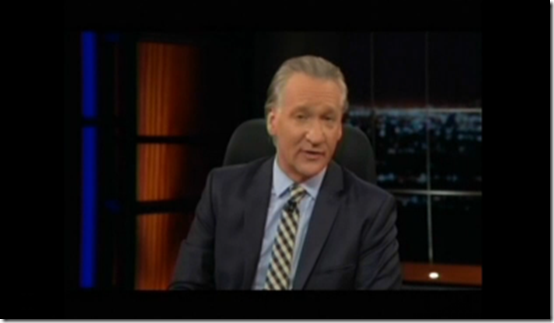 Bill Maher had a rather prescient “New Rules” closing monologue on Saturday. Many Conservatives and Right Wingers are likely to be very upset inasmuch as there is a lot of truth to his statements on America’s war acumen.

Maher admonished Kim Jong-un, the young Korean dictator to be careful. After-all, America is winding down its war in Afghanistan and will be without a major war for the first time in more than a decade. Following is the transcript from a few snippets of his monologue. The video follows as well.

I am not worried about him. But I do worry about America’s military industrial complex using any excuse to ramp up the war machine again. Be careful Mr. Kim. I know threatening the US is fun, but the reason it could bite you in the ass is with Afghanistan winding down America is now dangerously close to not having a war….

Come on. We are the war people. We don’t need a lot of encouragement…

Preemptive war, just war, wars of choice, wars of liberation, drug wars, wars we put on the credit card, anything with war in the title we are so there. We fought Mexico steal Texas, Spain to steal the Philippines, and the Indians because no one had invented Iraq yet. … Just in my lifetime, we have invaded Vietnam, Cambodia, the Dominican Republic, Grenada, Panama, Bosnia, Iraq, Afghanistan, and Iraq again. That’s when you know you are war mongers when some countries are coming up twice. …

However if you type “wars involving the US” into Wikipedia, the list is 32 pages long. At some point don’t you have to look in the mirror and say maybe it’s me? …

You know who the role model for every president should be? Jimmy Carter. Because he is the one out of all of them who figured out how to sit in office for four years and never fire a shot.

It is high time that someone acknowledges the basic decency and strength through diplomacy of President Jimmy Carter. For too long, while greatly admired throughout the world, Americans have allowed the Right to disparage Carter.

Maher is correct; working towards peace is the ultimate display of strength. Choosing war is easy. Choosing war means telling the many companies that comprise the military industrial complex yes. Choosing war means using the fog of war as Bush did, to convince a citizenry to give up their civil liberties (e.g. the Patriot Act).  Choosing war means having a ready-made excuse for all domestic failures that are then generally falsely attributed to war.

President Eisenhower’s January 17th, 1961 farewell address remains relative to this day. The following paragraphs within the speech were likely the most important and are what we have summarily ignored.

In the councils of government, we must guard against the acquisition of unwarranted influence, whether sought or unsought, by the military industrial complex. The potential for the disastrous rise of misplaced power exists and will persist.

We must never let the weight of this combination endanger our liberties or democratic processes. We should take nothing for granted. Only an alert and knowledgeable citizenry can compel the proper meshing of the huge industrial and military machinery of defense with our peaceful methods and goals, so that security and liberty may prosper together.

Inasmuch as Bill Maher is funny and his monologue is funny, his statements more now than ever should give us pause. As we are beginning our path to a warless time, we can hear the drumbeats of our corporate controlled media attempting to instigate the type of disproportional hype that makes yet another war plausible. How else can one explain a suspiciously timed release of the Reuters piece “‘Speculative’ Pentagon Report On North Korea’s Nuclear Missile Capability Sparks Fear As Officials Urge Skepticism”.