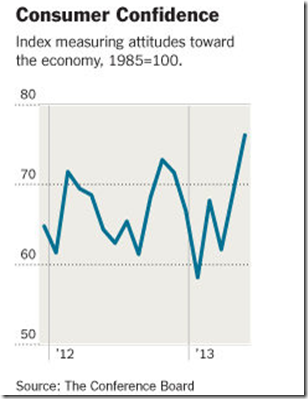 According to The Conference Board consumer confidence is at a 5 year high. It is now sitting at 76.2 (1985=100), up from 69.0 in April. More people believe the job market will get better. Their upbeat outlook also applies to their short term expectations for the economy.

According to the New York Times,

Housing prices rose in every one of the 20 cities tracked, continuing a trend that began three months ago. Similar strength has appeared in new and existing home sales and in building permits, as rising home prices are encouraging construction firms to accelerate building and hiring. [source]

It was not long ago that high gas prices had consumer sentiment falling. Now gasoline prices have fallen and seemingly stabilized. The stock market is at or near an all-time high.

All this seemingly good news is making everyone feel as if a real recovery is on. All this euphoria about this recovery must be taken with a grain of salt. One should remember the phrase ‘you never let a serious crisis go to waste’. The American Plutocracy abetted by the government sure did not.

The Great Recession was used to its full potential. Austerity during a recession with large deficits became the policy advocated by the now debunked Right Wing economists Reinhart & Rogoff and adopted by much of Europe and to a lesser extent in America even as a renowned Nobel prize winning economist advocated otherwise. Government laid-off thousands of well paid employees even as they hired low wage contract labor. The Fed continues to keep interest rates very low. States continue to slash spending on education and other middle class programs.

What does all this mean? It means middle class pilfering version 3.0 is in process. It is a fact that the wealthy’s wealth is growing at a faster rate than the economy at large. It is a mathematical certainty that only by extracting growth from the middle class can this process continue. That is exactly what current policies are allowing.

A smaller government that pays contractors in lieu of employees that earn a living wage and benefits is a transfer of wealth to the few who make a profit on the backs of the low wage workers. Low interest rates mean those that were dependent on already small interest payments from their savings must live on much less. Banks however can borrow at these extraordinarily low rates even as they lend at relatively high rates.

As government cuts budgets tuitions continue to rise. Students are then burdened by more student loans and with that a slowdown in their upward mobility. With housing prices on the rebound after being depressed for so long, one can expect the vultures to come back in vogue. The banks selling government backed reverse mortgages are primed and ready to take much of your equity as they entice you to live ‘la vida loca’ on your equity instead of leaving your nest egg for the next generation.

The economy is on the mend. The middle class is unlikely to come back to their relative level of income and wealth. The winds are simply too strong. The unions are too weak to advocate for enough middle class folks. There is a large enough unemployed pool to keep wages low. Indebted graduates must take whatever they can find.

The danger of an improved economy is that Americans have been down for so long that they accept this new floor for the middle class. Americans allowed their pilfering with the high tech bubble and the housing bubble. These were nothing but a form of middle class wealth donation to the wealthy. If Americans allow another recovery on the backs of the middle class, indentured servitude will be next.

Americans must fight for systemic change. Free higher education must be the norm for the poor and middle class. US must incentivize keeping jobs in the US through the tax code. Much higher taxes on the wealthy to rebalance what was taken through purchased political policies are a must.