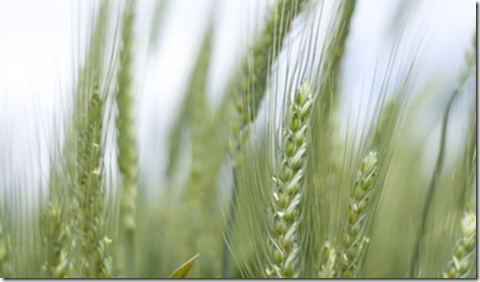 It was just a matter of time before a farmer would find his/her field infected with genetically engineered crops. Once genetically modified crops are allowed outside of a laboratory, it can and will reproduce. It will migrate with the wind, bees, clothes, and birds. It is for this reason that tough regulations are needed on any product or process that affects the food supply. Once the genie is let out of the bottle, it is hard to put it back in.

The Oregonian reports the discovery of the genetically modified wheat crop as follows:

… an unidentified Oregon wheat farmer noticed that some wheat plants he had sprayed with glyphosate had survived. Genetically-engineered wheat is resistant to glyphosate, and such plants are often referred to as “Roundup resistant” or “Roundup ready” because they resist the Monsanto product.

The farmer was preparing a field for planting, which often involves killing weeds or plants that sprout voluntarily from seeds knocked loose during harvest. However, some wheat plants that had popped up survived spraying with glyphosate.

The farmer reported it to an Oregon State University researcher and delivered plant samples on April 30. Initial tests showed the presence of a transgene that conveys resistance to glyphosate, according to a U.S. Department of Agriculture website. The OSU scientist notified the USDA on May 3, touching off the federal investigation. [source]

According to the same report, the U.S. Department of Agriculture is taking this case seriously, as they should. What is disconcerting is the reactive nature of the government. It does not taka a scientist to understand that man made changes to plants may have adverse effects on humans and animals. As such it requires a proactive approach to regulations. After-all, there is ample evidence that GMO crops have made it into our food supply before.

If corporations are allowed to implement GMO technology it is incumbent on the government to be proactive with strong regulations to protect citizens. Regulations are not enough however. Strong monitoring and enforcement is a must. After-all, if GMO crops begin an uncontrolled spread because of lack of monitoring and enforcement, it is the taxpayer that is likely to be stuck with the bill as corporations simply  need  to bankrupt themselves out of existence after having reaped the spoils.

From a business point of view many countries that farmers export to do not want GMO products. It has a financial impact on the livelihood of farmers. Bloomberg BusinessWeek says it best.

There are two reasons to care. Food safety folks lobby hard for labeling of genetically modified foods, saying that the jury is out on the long-term health and environmental effects and consumers deserve to know what they’re buying. The companies that make the seeds say they’re perfectly safe. And for wheat farmers and exporters, this potentially cripples the export market: Many foreign buyers don’t want genetically modified wheat and can switch their buying to Russia, Ukraine, Australia, and other large exporters. Japan reacted quickly, canceling an order today for nearly 25,000 tons of wheat, Bloomberg News reported, and wheat futures dropped on the Chicago Board of Trade. [source]

Many on the Right side of the government continuously fight regulations. They claim it reduces efficiency. They say it costs jobs. The reality is that it is the lack of sensible regulations that is not only inefficient, but has the potential to cost jobs and lives. If one looks at major industrial catastrophes that have occurred from oil spills, collapsing structures, to food contaminations, they can always be linked to failed regulations. Sadly it is generally the average citizen through taxes or lost economic potential that ultimately is affected.