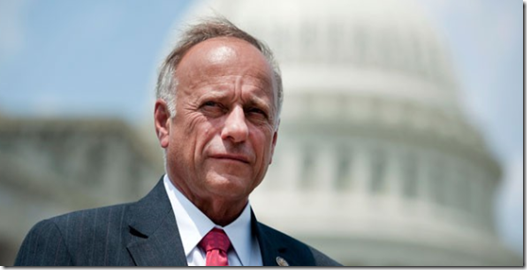 One week after House Republicans passed an amendment that effectively deports DREAMers, undocumented high school students held a peaceful protest in Rep. Steve King’s (R-IA) office. In their caps and gowns, the undocumented members of United We Dream occupied his office during regular hours to advocate for immigration reform. …

King regularly introduces bills to stop “anchor babies” and discriminate against non-English speakers. He has compared immigrants to dogs and livestock.

#Gof8 You promise border security. How, when we can’t secure Congress from Obama amnesty? Schumer, McCain, come guard my door.

When a Congressman from a particular party feels it is OK to send such blatantly demeaning and racists tweets with no immediate pushback from party leaders, it speaks about the culture within that party. The Congressman should remember that the American people are the owners of his office and pays him to serve.

The Iowa congressman is leading an anti-amnesty posse with a lot in common: whiteness, maleness, 50 plus-ness, Republican-ness. Oh yeah, and they’re against the immigration reform bill.  …

I asked King on Thursday if there should have been federal immigration officers in the room to track down people without papers.

“There was an agent in the room…his name is Chris Crane,” King said, referencing the head of a union for immigration agents. “He is prohibited from enforcing immigration law by the existing leadership.”

I asked if Crane should have been allowed to deport the people in the hearing.

“Even if he has someone that he knows is here illegally and they’re in jail, he can’t deport them,” King responded. [source]

If it walks like a duck, quacks like a duck, paddles like a duck, and flies like a duck then it is definitely a duck. The continuous instances of Republican  leaders making racist, sexist, and other insensitive statements publicly and privately put in doubt whether the party can be salvaged politically or morally absent the a complete purge of the spoiled apples amongst the good apples.

The college Republicans came out with a report that pretty much itemized the GOP problem. It seems that they have not yet gotten the message. Perhaps enough Americans including moral Republicans will come out in 2014 and vote the troglodytes out.