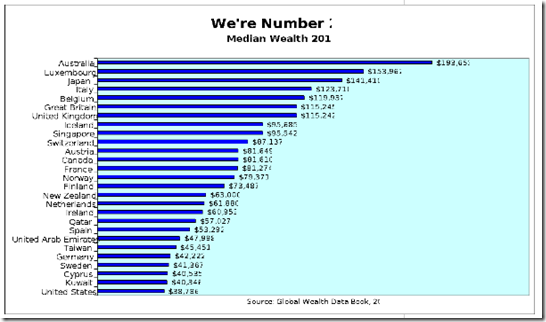 Yesterday I wrote the blog post titled “Al Gore Questions Capitalism – Decimation of Working Middle Class Missed.” The basic tenet of the article is that the current implementation of capitalism was leaving the middle class behind.

I woke up this morning and found the most prescient post on one of my Facebook friend’s wall. She is a community activist that continues to work hard to promote equal access to upward mobility. This friend of mind is likely in the top 5% or 2% but her liberal morals dictated that those opportunities are afforded to everyone.

I provide the above preamble because many think that those that recognize the systemic problems in our economy articulate them and fight to get them changed are encouraging “takers trying to get something not earned from the makers.” The reality is that the poor and middle class in America are those that have afforded the wealthy the wherewithal to be wealthy. Who has more worth, the poor person who can live off the land and be self-sufficient or the person with capital/wealth who have servants to do all the things needed for said wealthy person to survive.

One must listen to the blog post “Nick Hanauer TED Speech–Wealthy Do Not Create Jobs–The Middle Class Does”. This multimillionaire acknowledges the fact that it is the middle class and the poor that contribute most to the economy and gives a select few that ability to monopolize capital.

But I digress, my friend posted the article “Big Lie: America Doesn’t Have #1 Richest Middle-Class in the World…We’re Ranked 27th!” It blows the myth that as the richest country this planet has ever seen that somehow it translates to the most prosperous middle class as well. This article debunks the myth. The author states the following.

America is the richest country on Earth. We have the most millionaires, the most billionaires and our wealthiest citizens have garnered more of the planet’s riches than any other group in the world. We even have hedge fund managers who make in one hour as much as the average family makes in 21 years!

This opulence is supposed to trickle down to the rest of us, improving the lives of everyday Americans. At least that’s what free-market cheerleaders repeatedly promise us.

Unfortunately, it’s a lie, one of the biggest ever perpetrated on the American people.

Our middle class is falling further and further behind in comparison to the rest of the world. We keep hearing that America is number one. Well, when it comes to middle-class wealth, we’re number 27.  [source]

The article goes into to the reasons why the middle class is struggling and assigns blame duly on the financial sector and its shenanigans. The article is a call to action that every working middle class, poor, and moral enlightened wealthy person must heed.