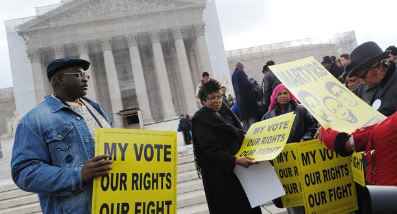 The Supreme Court has just dealt a blow to the American Democracy. It has just ruled on Section 4 of the Voting Rights Act and said that the section is unconstitutional. It left it to Congress to fix (come up with a new formula for preclearance). This was a 5 to 4 decision along the ideological lines of the court. Justices Antonin Scalia, Anthony M. Kennedy, Clarence Thomas and Samuel A. Alito Jr. joined Chief Justice John G. Roberts in the decision. Chief Justice Roberts Jr. wrote the majority decision. Justice Ruth Bader Ginsburg dissented, and was joined by Justices Stephen G. Breyer, Sonia Sotomayor and Elena Kagan. Justice Ginsberg read her dissent as Samuel Alito, showing lack of decorum, rolled his eyes and displayed other disrespectful antics.

Section 4 of the Voting Rights Act defines the coverage formula by which preclearance of any covered jurisdiction is applied. These jurisdictions are required to get approval from the Justice Department to effect any changes that would affect voting.

The 2004 figures come from the Census Bureau. Census Bureau data from the most recent election indicate that African-American voter turnout exceeded white voter turnout in five of the six States originally covered by §5, with a gap in the sixth State of less than one half of one percent. See Dept. of Commerce, Census Bureau, Reported Voting and Registration, by Sex, Race and Hispanic Origin, for States (Table 4b). The preclearance statistics are also illuminating. In the first decade after enactment of §5, the Attorney General objected to 14.2 percent of proposed voting changes. H. R Rep. No. 109–478, at 22. In the last decade before reenactment, the Attorney General objected to a mere 0.16 percent. S. Rep. No.109–295, at 13. There is no doubt that these improvements are in large part because of the Voting Rights Act. The Act has proved immensely successful at redressing racial discrimination and integrating the voting process.

What the majority does not understand is that the success of the formula is what makes that increased voter participation possible. Removal of the formula even if temporary will have disastrous effects in presenting representation that does not reflect the desires of the population.

Texas is a great example that illustrates why these laws are needed. Texas finds the most ingenious ways to get around the law to suppress its voters. A state that is majority minority that votes exclusively for Republicans in statewide races is probative. Texas makes it difficult for voter registrars to get qualified, it adjust voting hours based on empirical demographic considerations that affect minorities, and draws districts based on turnout models to get around many laws. Nullification of Section 4 simply adds another tool to that toolbox. The Texas scenario is likely be replicated throughout many states.

While the Supreme Court has pretty much left the ball in the hands of Congress, it is unlikely that Congress will act for two specific reasons. Firstly, a Republican House that is in existence not by popular vote but by gerrymandering (Democrats got over one million more votes than Republicans in Congress even as they have a large majority), is in no hurry to stop the status quo. Secondly, the current Republican Party is unable to win the presidency without voter suppression. Republicans likely see this ruling as a gift.