Maurice Bradford, AKA Macarone performed in the lobby outside the main exhibit halls at Netroots Nation 2013. In a recent interview: 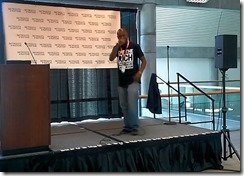 With his name and his residence in conservative Orange County, California, Maurice Bradford could be an attorney or an accountant. But instead he’s Macarone, a self-styled “rap activist” who is carving out a niche as a hip-hop spokesman of the political Left. Messaging Matters caught up with Macarone at his recent performance to benefit Cenk Uygur’s Wolf PAC:

When did you discover your interest in performing music, and what you did to pursue that interest?

As far back as I can remember, I had a desire to perform. I started doing music in the garage with my friends and family, which is still what DOP Inc is to this day, a family. I had a group called Nutthouse with some of my homies and eventually my little brother Trashman and my cousin Hitman. We performed the Orange County/Los Angeles circuit and released several underground hip-hop releases while developing a local following. We graduated from recording in the garage to recording in the kitchen. Eventually we graduated to professional studios.

Who are your biggest musical and artistic influences? Do they include rock and even punk in addition to rap and hip-hop?

My biggest influences probably come mostly from hip-hop, like 2Pac, Public Enemy, NWA & Ice Cube; however, I am a big fan of all music and a lot of my influences come from Rock/Classic Rock/Punk/Ska/Reggae as well. I love Rage Against The Machine, Rise Against, Sublime, Bob Marley, Barrington Levy, Jimi Hendrix, Janis Joplin, The Doors, Guns N’ Roses and more. I have always believed that true creativity doesn’t have a genre. I also love blending my music with different styles to see what we come up with, as well as reaching back to the roots of hip-hop for inspiration and motivation. One of our goals is to be inclusive, and we aren’t scared to try different things to help us achieve that. I love the flexibility of the guitar even though I can’t play it, and I love to use it in my music.

How did you become involved in the political process, or, more broadly, the big issues that affect you, your family and friends, and many Americans?

George W. Bush is probably most responsible for my wanting to be involved and vocal about the political process. I used to write what most people would call “Gangsta Rap”. Bush made me want to make “Political Gangsta Rap” that talks to the listener about “politics” but still sounds like the other music in their iPod. I have always felt a connection with the struggle and with the people in the struggle. I want to show people that the struggle isn’t colorblind, poor people come in all shapes, sizes and of course, colors. I have always been a fan of people who fought oppression, poverty, police brutality and corruption. I often look to people like MLK, Malcolm X, Fred Hampton, Marcus Garvey, W.E.B. DuBois, Kathleen Cleaver, Cornel West and others for quotes and inspiration when I write music. As I grew into a man, I could no longer continue making music that was, in my opinion, “useless.” Sure it might sound good, but the music I grew up listening to not only sounded good, it meant something.

Macarone had a  captive audience. In fact he had a constant stream of Netroots Nation 2013 attendees picking up both his cards and Wolf-PAC cards.

Move To Amend and Wolf-PAC are two organizations mobilizing Americans to take their country back starting with an awareness campaign, followed by the enacting of a constitutional amendment to remove money out of politics and the codification stating that corporations are not people. This will provide the fabric to begin the building of our democracy.