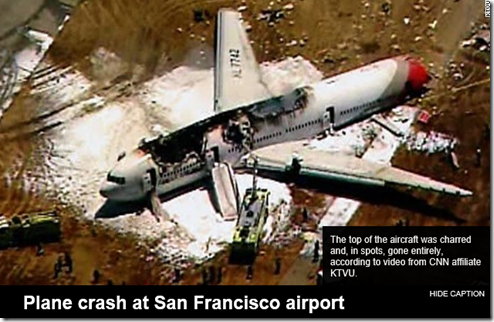 (CNN) — An Asiana Airlines’ Boeing 777 crashed and burned Saturday while landing at San Francisco International Airport, sending up a large plume of dark smoke from an aircraft that lost its tail and much of its roof.

Flight 214 left Seoul’s Incheon International Airport earlier Saturday and flew 10 hours and 23 minutes to California, according to FlightAware, a website that offers tracking services for private and commercial air traffic.

The U.S. Coast Guard has transported one person to Stanford Hospital, said Corrine Gaines of the military branch. She did not provide additional information on the patient’s status, and there was no further word on any casualties.

Anthony Castorani, who witnessed the flight land from a nearby hotel, said he saw the plane touch the ground then noticed a larger plume of white smoke.

"You heard a pop and you immediately saw a large, brief fireball that came from underneath the aircraft," he told CNN.