Off The Kuff blogger Charles Kuffner has a great analysis on what it will take to turn Texas blue by 2016. Mr. Kuffner’s analysis is spot on. I went to Battleground Texas Neighborhood Team Convention yesterday. There were several hundred people there from Harris and surrounding counties on a Sunday afternoon during a non-election period.

The San Antonio Current has a great story on what Battleground Texas is up to, and why more than just increasing turnout is needed to turn Texas blue. 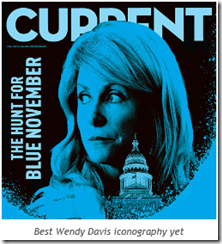 The Democrats can take Texas in 2016 if they can tap into one a key segment: white Texans, and in particular white women, the new kingmakers–or queenmakers–of Lone Star politics.

Why? Women of color broadly support Democratic candidates, but that’s just the point: BGTX needs to mine new veins of voters. At least at this stage, minority population trends alone will not lock up the race, since heavily Republican non-Hispanic whites will still hold a slim majority through the next presidential cycle. Even if Battleground succeeds in ramping up meager Hispanic voter turnout to white levels, a Republican candidate would likely still prevail in 2016.

“I think [Texas Battleground] realizes that it’s not just a matter of finding and turning out minority voters,” says Ruy Teixeira, co-author of the book The Emerging Democratic Majority and a senior fellow at Center for American Progress. “It’s also a matter of finding and turning out relatively liberal white voters, given the structure of the Texas electorate and given how conservatively white voters have been voting. The treasure trove would presumably be more likely to be college educated, more likely to be younger, and more likely to be women living in the big metropolitan areas.”