What was most amazing was the number of people that showed up. It far outnumbered what was anticipated. Jenn Brown, the executive director of Battleground Texas drove in from Austin, Texas to be at the event. She provided insights from her organizing experience in Ohio.

Ms. Brown provided some insights on the race that explains why the Obama campaign was very confident of winning Ohio even as the talking heads were calling it a close race. Ms. Brown said a few days before the election Romney’s team was confident as they broadcasted to the media that their people had made 70,000 contacts. When she checked her database over the same period, the Obama campaign had contacted over 370,000. 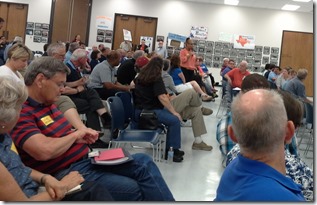 She intends to bring that same type of data driven and personalization campaign to Texas. When she came into the building she said she expected to see just a few people. She was ecstatic at the number being in the hundreds.

Ms. Bell presented several speakers that discussed campaigns, grassroots organizing, messaging, and several other topics necessary to engage Texas citizens. She made it clear that while many think changing Texas politics is a long term proposition, she expects to see results effective in 2014. That brought a roar from the audience.

By the end of the event the neighborhood teams had prepared their marching orders. They left that convention not just energized, but resolved to take back a state whose working middle class has been decimated, a state whose women’s rights have been abrogated, and a state poised to codify voter suppression by an intransigent Republican Legislature and Governor.

The Progressive movement in Texas has legs. This event among many validates that Texans want a better tomorrow. They will only get that better tomorrow with a new government. Battleground Texas is doing their part.