Liberty Tree Foundation for the Democratic Revolution is conducting its 2nd biannual Democracy Convention in Madison Wisconsin between August7th and August 11th. Many activist organizations are presenting conferences including Move To Amend, Code Pink, Liberty Foundation, Alliance For 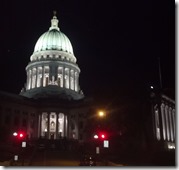 One cannot escape the beauty of downtown Madison with that State Capitol where workers stood last year in the thousands to attempt to ‘persuade’ Governor Scott Walker and his cohorts from dismantling what workers have fought for. After-all, isn’t Wisconsin the birthplace of the Labor Movement?

Deena Brazy, an attendee to the conference explains the dynamics of Wisconsin politics. She articulates the craftiness of politicians to use the most negative of humans’ instincts that as oppose to helping all, in the long run hurts all.

Why did Wisconsin citizens elect these politicians? Could it be that it is simply because their fellow citizen who work for the state has union benefits not as good as theirs? That being the case, why take benefits as oppose to fighting in solidarity to make life better, a living wage with benefits for all?