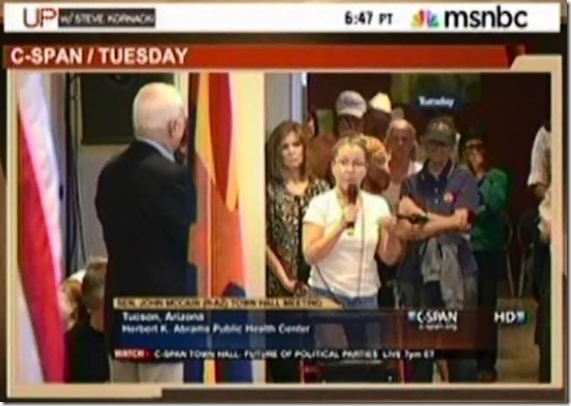 With so many hurting in America, with so many having to defer their education, with so many having to work two or more jobs just subsist, with so many coming to the realization that the American Dream is but a dream, one wonders why more town halls are not exploding with people wanting to tell politicians their stories or wanting the heads of these politicians. It was refreshing to see an American citizen, a taxpayer, a person many in the Republican Party label a taker, confronts Senator John McCain directly. She forced him to confront the narrative of his party and how it affects real people.

‘Taker’: It kills me every time I here senators, especially Republicans, talk about those takers, those takers, they are just taking. The takers, I paid, I paid taxes for over thirty years and I have a rare illness and I am disabled. … The state of Arizona raised the eligibility for a program that was paying $100 a month for my Medicaid to 3.4%. Consequently I was cut off $100 a month which meant I could no longer go to physical therapy. … They do it intentionally to cut as many people as they can for benefits that are desperately needed. It is just not right. Cause we are the takers.

The citizen’s story is touching but should be explored in a deeper systemic manner. Granted that there are a few citizens (in a country of over 300 million, a small percentage is a large number though in the aggregate inconsequential) that abuse the social safety net, it does not approach the levels at which this economy pilfers the working middle class.

The citizen that complained at John McCain’s town hall cried as she described her problem. She approached John McCain as someone she wanted to be empathetic with her condition and the condition of most of the ‘takers’. That is the problem. It is time that American citizens assert their worth and approach their politicians from a position of strength. It is every American worker that has made this country great. There would be no country without the fast food worker, the maid, the doctor, the lawyer, the engineer, and everyone in between. It is time that every American demand a country where they are paid a living wage and that as a society they can live with dignity when this manmade economy suffers its man induced hiccups.