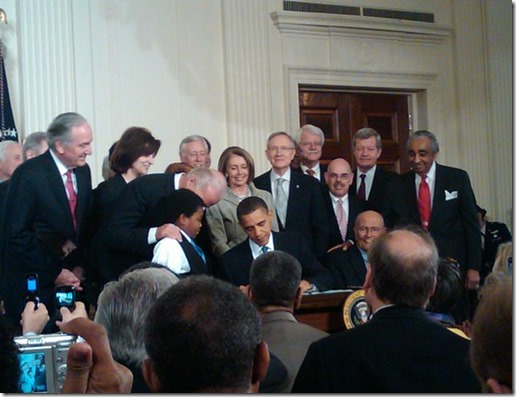 To many Liberals, the Affordable Care Act (Obamacare) was a gift to insurance companies. In fact, many of those in the opposing Obamacare opposed it because it did not go far enough. It was not Medicare for all (single payer) nor did it have a public option. Corporate interest won the first round but they will lose the war and they know it. It is for this reason that the GOP continues to fight the battle against Obamacare just hoping that just maybe they can break it before metastasis.

When one is born one does not choose gender, genetic makeup, or predisposition to any particular disease. As a mostly free society we do not dictate what foods people can eat, what “legal” vices they may indulge in, or whether they should be sedentary or active. We know that the vast majority will at some time get sick. Moreover, we know that some that live a very responsible and a healthy life will get sick often and some that live a rather unhealthy and irresponsible life will rarely get sick. Of course the converse is also true. My father cycled 10 miles frequently, walked 2 to 5 miles every day, ate well, got his annual exams and suddenly died of a heart attack at 77. My mother-in-law continues to eat badly, does no exercise, had a quadruple bypass and many other surgeries and thankfully remains with us.

As a civil and moral society we the people create institutions to do things that are done better together than as individuals. We don’t each build a piece of road in front of our homes or independent paths to a grocery store. Because roads, schools, national defense, satellites, etc. are of utmost importance to our continued existence, we the people collectively finance it. They are not free. We all pay towards it because individually it is impossible or unduly burdensome.

How can we not look at health insurance in that same light? How could we have sold our health and financial well-being to be traded like a commodity? You cannot be pro-life and support a health insurance system that discriminates by gender, pre-existing condition, or some other metric. Doing so is the potential abortion of a born human life.

Insurance companies have a fiduciary responsibility to maximize profits for its shareholders. There is absolutely nothing wrong with that based on our current economic system. From the insured point of view the sole purpose of a health insurance company is to pay a medical bill if one gets sick. Paying a bill requires no innovation and very little skill other than verifying a bill is not erroneous or fraudulent.

Health insurance companies add one complexity, risk. In other words because there are several insurance companies and they all must make a profit, they must limit risk. They limit risk by only insuring healthy people. This means all those that are sick or have a pre-existing condition are left without insurance or with overpriced or substandard insurance.

Health insurance companies also use several methods to increase their profits. They delay payments to providers, they deny procedures and drugs (insurance coming between you and your doctor), they have maximum payouts, or they simply throw you off the policies based on biased technicalities. These are acts that can bankrupt your family, materially affect your health, and thus can kill you. As such they are immoral.

Obamacare gets rid of the immoral parts of health insurance. The practices of recissions, denied coverage for pre-existing conditions, and caps will be gone. Many new preventative screenings had to be part of every plan without copays. 80% or more of premiums must go towards actual healthcare.

There are several health insurance companies. Each one must have its own CEO, CFO, Board, advertising, shareholders, buildings, and staff. The cost of duplicating all these expenses is the reason why up to 33% of every insurance premium goes into someone’s pocket instead of into healthcare. We are asked to unlearn basic arithmetic in order to accept that the above system could somehow be less expensive or more efficient than a system where we all pay a premium to a single entity and that one entity pays the medical bill for those who get sick (no advertising, multiple CEO, CFO, Board, shareholder expenses, etc.).

During the Affordable Care Act debate there was a public option that would have simulated the latter. Lobbying summarily got it removed because had it made it into the Act, over a short period of time, arithmetic would prevail as the public option would be less expensive for any given plan. It would then turn Obamacare into a single payer system by attrition.

There are several different pathways to reach the same goal. It is however important that the paths are built. Obamacare is the path built with pebbles and stones. It is better than the mud path of years past. As riders demand a smoother path they won’t yearn for the mud path again but for a paved road. Americans will not go back after tasting healthcare/health insurance as a right with all the benefits mentioned above. Exchanges will become single payer entities as health insurance companies are unable to demand the profits they want. Eventually exchanges will morph into Medicare for all.

The genius of Obamacare is not that it solved the problem in its entirety. The genius is that it made reverting to an immoral system untenable.