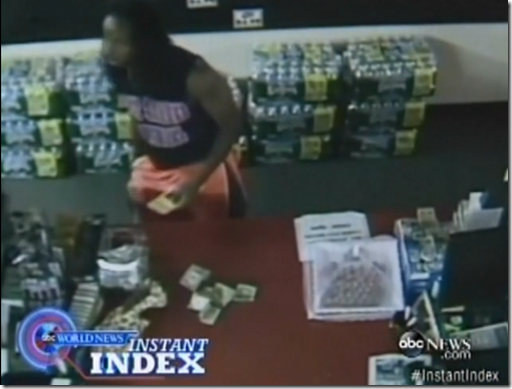 When I saw this story on ABC News Instant Index, I could not just help being amused. America is so pre-programmed to equate crime with black men that the actions of these 4 black men seemed so out of the ordinary that ABC aired it.

The four men shopped for their products then went to the checkout counter to pay. Not seeing the clerk, they waved at the camera to tell the checkout clerk that they were ready to pay. Since no clerk came, they simply added up the cost of their products and left the cash. At no time did they give the impression that they were trying to leave the store without paying. The owner of the store was so impressed that he invited them back to the store for a free shopping spree.

On a side note it is important to note that while black men may have a higher percentage crime rate than the norm; it is for very well-known socio-economic reasons. A justice system that provides too easy an entry for minorities, longer & harsher prison sentences, and presumptions of guilt is mentally enslaving and soul depleting. The destruction of the family unit via poorly designed public assistance for the poor through generations is also causative.

What is interesting is that immediately after watching this tape, I could not help but think that these guys assumed there was a clerk behind the camera scared as hell of them. I can just imagine their conversation when they got outside; “She must have been scared. Suppose we lived out that clerk’s stereotype, ha, ha, ha”. I believe if they knew the store was closed they would have left the products and left the store. After the publicity, they would probably never say.