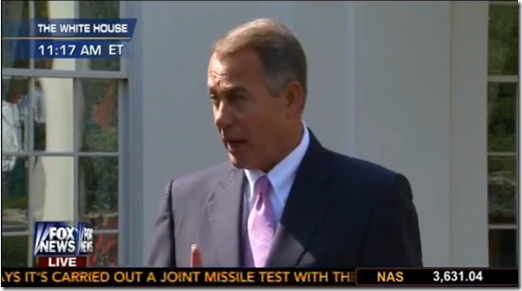 Speaker of the House John Boehner just came out in favor of President Obama taking military action in Syria. He walked out of the White House to the media and said the following.

The use of these weapons has to be responded to, and only the United States has the capability and capacity to stop Assad and to warn others around the world that this type of behavior is not going to be tolerated.

We have enemies around the world that need to understand that we are not going to tolerate this type of behavior. We also have allies around the world and allies in the region who also need to know that America will be there and stand up when it is necessary.

House Majority Leader Eric Cantor (R-OH) also came out in support of a resolution backing military action with a caveat. He said the authorization language will likely change but that America has a compelling national security interest to prevent and respond to to the use of weapons of mass destruction especially by a terrorist state like Syria. He claims the reason is to prevent further instability in the region.

According to Huffington Post, House Minority Leader Nancy Pelosi also came out in support of the President claiming that it was humanity who drew a red line decades ago and not the President. She reiterated that the President did not need congressional authorization for military action in Syria but that getting it was a good thing.

Yesterday the New York Times reported that McCain was on board stating,

The White House’s aggressive push for Congressional approval of an attack on Syria appeared to have won the tentative support of one of President Obama’s most hawkish critics, Senator John McCain, who said Monday that he would back a limited strike if the president did more to arm the Syrian rebels and the attack was punishing enough to weaken the Syrian military.

So the drumbeat to war continues. Republicans will support this Democratic President to wage war overseas. As long as money is being spent to bolster the military industrial complex’s coffers, Republicans will offer bipartisan support. Waging war against domestic unemployment, domestic infrastructure decay, domestic healthcare access failure, and domestic education failure do not merit support or incremental funding.

It is rather sad that the reason for Boehner’s support is more intellectually honest than many. Many who support an action speak about the human suffering that the use of these weapons caused as if murder by machete, napalm, shrapnel, and bombs are less painful or les outrageous. For Boehner it was about world order with the US being in control and demonstrating power to keep that order as the US sees fit. That lack to mention human suffering is probative as it is the same lack of humanity demonstrated domestically by both him and his party.

It is doubtful that most Americans want the cost of being the self-imposed police of the world. After-all, the state of the American working middle class is not aided by maintaining the current world order. They would much prefer that the President and Congress give Americans the wherewithal for them to rebuild their American dream.