Kingwood Area Democrats own Karen Menke does it again with her latest article in the Kingwood Observer. Karen says.

Election Day 2013 is Tuesday, November 5. It will be preceded by two weeks of Early Voting beginning on Oct. 21. If you live in the City of Houston, you will be voting on the Mayor and City Council in addition to nine statewide amendments to the Texas Constitution. If you are not in Houston, you may have other local items in addition to the amendments on your ballot.

Keep in mind that the City election is a non-partisan election and there will be no party affiliations on the ballot. Texas law, with respect to voter identification and registration, is complex. This is an attempt to summarize information which can be found at www.harrisvotes.org. Visit this website to answer any questions.

Despite the fact that there have been numerous lawsuits filed against the Texas Voter ID Law, according to the Harris County Clerk’s Office, the Texas ID Law will be in effect for in-person voting in the November Houston and Harris County Elections.

Texas already has one of the lowest rates of voting in the country. It is expected that the Voter ID laws will further reduce voter participation in our state. The State of Texas estimates 800,000 registered Texas voters do not have any of the required forms of identification. It is uncertain how many of these registered voters will be able to obtain such ID before Election Day.

The Voting Rights Act of 1965, which was designed to increase voting by all citizens by outlawing poll taxes, literacy tests and other blocks to voting may have been circumvented by State Voter 1D Laws and it is possible Congress will again step in to protect voting rights if such laws are not struck down by the courts.

Read the entire article below. 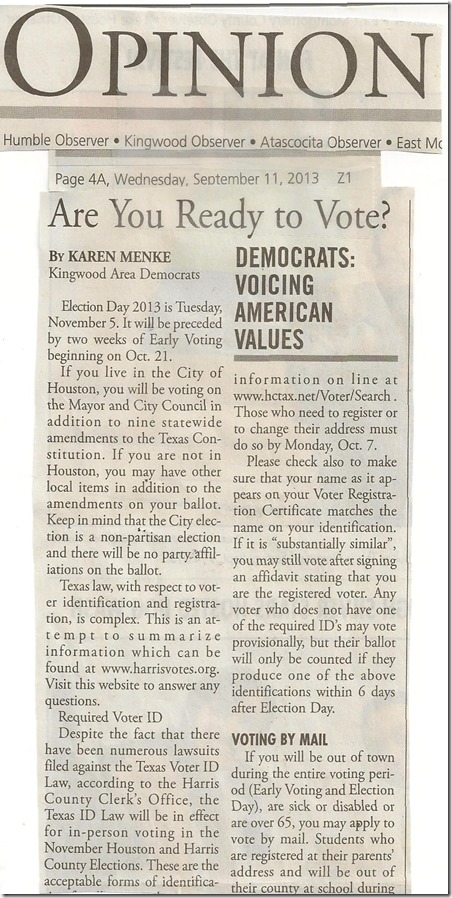 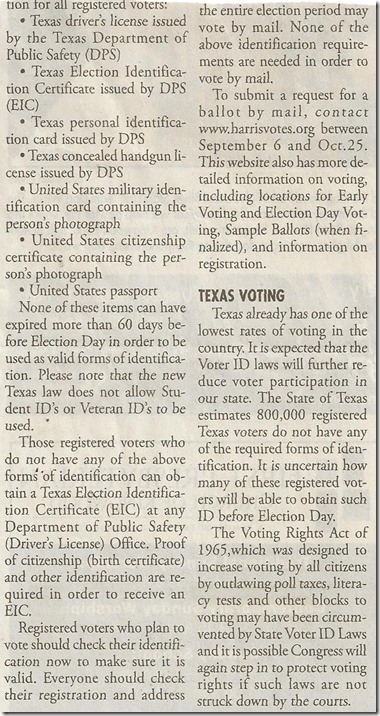