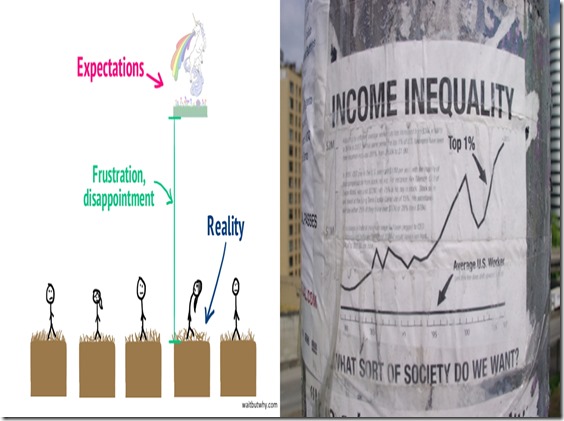 I woke up early this morning and evidently my daughter woke up even earlier given that she had already left me a link in Skype chat telling me I needed to read it. The article was titled “Why Generation Y Yuppies Are Unhappy”. She is a University of Texas Austin Generation Y Yuppie (GYPSYs) graduate who is now going to school to be a doctor. I am not sure if she sent this to me because every now and then I tell her to suck it up when she complains while simultaneously her she can be successful at anything she wants to be successful at. Whatever the case (she would never tell me directly), it was a good read but one that left me feeling a bit disappointed since the article seemed to say that GYPSYs’ condition is completely self-inflicted.

While the article was good, it summarizes that GYPSYs’ expectations are too high. GYPSYs are not entitled to have a better life than their parents. They are delusional for wanting a fulfilling career. They are not as good as they think they are. And that social media makes many feel inadequate because they attempt to live vicariously through their more successful peers’ postings.

What is striking was the less than proactive advice at the end of the piece.

1) Stay wildly ambitious.  The current world is bubbling with opportunity for an ambitious person to find flowery, fulfilling success.  The specific direction may be unclear, but it’ll work itself out—just dive in somewhere.

2) Stop thinking that you’re special.  The fact is, right now, you’re not special.  You’re another completely inexperienced young person who doesn’t have all that much to offer yet.  You can become special by working really hard for a long time.

3) Ignore everyone else. Other people’s grass seeming greener is no new concept, but in today’s image crafting world, other people’s grass looks like a glorious meadow. The truth is that everyone else is just as indecisive, self-doubting, and frustrated as you are, and if you just do your thing, you’ll never have any reason to envy others.

As a baby boomer born in the 60s the piece made me feel sorry for my GYPSY daughter born in the 90s. Is this how she and her generation really feel?

When I was  making pizzas, delivering pizzas, sweeping & mopping floors while attending the University of Texas Austin (yes, dad & daughter are Longhorns), I felt poor but always knew I had something to look forward to. This article made a successful future look merely plausible. Who bets life on plausible?

A few hours later my daughter sent another link. It was someone who had a rebuttal. Adam Weinstein wrote the piece titled “Fuck You. I’m Gen Y, and I Don’t Feel Special or Entitled, Just Poor.” It was a justifiably belligerent article. It is the anger that GYPSYs need to tap into. Four paragraphs in his article say it all. It provides a superficial look at the hand GYPSYs have been dealt.

There *are* delusions at play here, but they are not our generation’s. They play out as two contradictory lectures that we are told, simultaneously, by our monied elders:

1) This is AMERICA. Everybody does better than their parents!

2) This is AMERICA. Suck it up and quit bitching that you’re not as well-off as your parents!

The latter maxim lurks in the heart of every critique of millennials. It assumes that if we’re worse off than previous generations, the fault is ours, and our complaints are so much white whine. We should shut up and be content, because we do work less than our forebears, and spend more time enraptured by our own navels, trying to divine some life-affirming creative direction in them.

But there’s nothing for us to suck up, really. As a rule, our parents did end up much more dedicated to their careers than we have. But as a rule, they were laid off less. They didn’t intern or work as independent contractors. They got full medical. They were occasionally permitted to adopt magical unicorn-like money-granting creatures called “pensions.” Or, barring that, they accumulated a huger 401K to cash out before the Great Recession, because they saved more. And they saved more because the costs of college, of kid care, of health care, of doing business and staying alive and buying groceries and staying connected, were far less than they are today. They could raise a family on one salary if necessary.

They had room to advance and buy things. Yes, even the creatives. I once listened to a professor, who is in his sixties, read us the first published piece he’d been paid for, in the late 1970s. A thousand words or so. The rate, he says, was something like two bucks a word. That’s four times what the Village Voice pays today, even for an award-winning investigative cover story. It’s geometrically greater than what most writers can earn today writing daily brilliance for nationally renowned publications online. And writing daily brilliance, which many of them do, is hard goddamned work.

Weinstein understands that the bulk of the problem isn’t the fault of GYPSYs. He understands that it is a Plutocracy that have sucked the life out of the middle class. Where are pension plans? Why did GYPSYs have to borrow so much for college while respective wages and salaries are diminishing? Why are the wealthy getting the spoils that come from worker productivity while those who overpaid for their education are in dire straits? Why is healthcare unaffordable? The questions go on and on. None of these ills are the fault of GYPSYs yet they are forced to navigate their consequences.

When Bill de Blasio won the Democratic mayoral primary in New York on a very liberal/progressive message I wrote the piece “America Is A Liberal Nation. A Liberal Wins On A Liberal Message”. I took a lot of flak from folks that said one cannot use a liberal city and extrapolate it to a nation. Of course this liberal city, New York, had not elected a Liberal in decades. After taking a beating for the piece for some time, there was a long article by Peter Beinart that was vindicating. I blogged it in my piece “Again: New York Mayoral Race Is The Canary – America Is Liberal.” He acknowledged that GYPSYs all feel the angst of that which Weinstein articulates. More importantly he takes the position that GYPSYs will be the group that forces the nation’s turn back to a progressive, liberal, left direction, a direction where all have access to success.

Adam Weinstein rebuttal is the spark that is needed for GYPSYs and baby boomers alike to engage with the body politic to correct what ails the country. It won’t change with GYPSYs and boomers acquiescing to some new normal. We live under an unfettered  form of capitalism where those that work hard, those that produce our goods and services are nothing but pawns to a Plutocracy that could not even make it on their own. We must rediscover our self-worth and demand our share of the economy with impunity. Generation Y yuppies and boomers must get off their asses, engage, and enforce change.