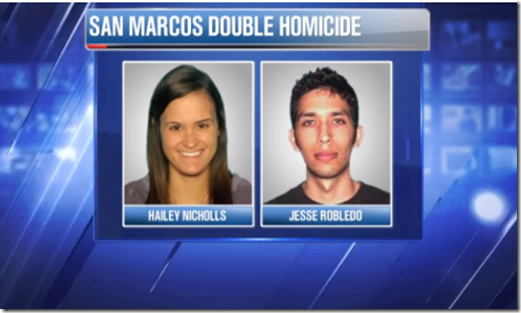 2009 Kingwood High School graduate Hailey Nicholls was found  murdered this morning in San Marcos, Texas. I cannot imagine the pain her family and the family of her boyfriend are going through. Having a daughter that went to school with her hits home. Following is the story by KVUE.

Just before 1 a.m. Thursday police were called to 317 Craddock Avenue. There they found Hailey Nicholls, 22, and Jesse Robledo, 27, dead from apparent gunshot wounds.

The double homicide happened at the Executive Townhouses in San Marcos. Nicholls and Stillwell both lived in the complex.

Police say all three worked together at Chipotle at some point in time. Stillwell is Nicholls' ex-boyfriend. Nicholls grew up in Kingwood. She studied fashion merchandising at Texas State and had a twin sister, Shelby.

"It's really sad, just really really sad," said neighbor and fellow student Katelyn Fife.
Police say she dated Stillwell for about a year and a half. They recently broke up and she started dating Robledo.

"She was a beautiful girl and a sweet girl," described Apartment Manager Claudia Kotin."Very sad, very sad, we have a lot of residents the same age. Some people heard screaming. It's not good for anybody."

Tweets of sympathy for the family of Hailey Nicholls

Saying a prayer tonight for the family and friends of Kingwood Graduate 09 Hailey Nicholls. Rest in Peace. So young Such senseless violence.

My heart goes out to the Nicholls family. This world is sick. Rip Hailey God gave us a new angel

At a complete loss for words. How someone can take another's life I'll never understand. Prayers for Hailey Nicholls & her family.

Everyone take some time today to pray for one of our Bobcats, Hailey Nicholls, and her boyfriend who were killed today. Rest easy.