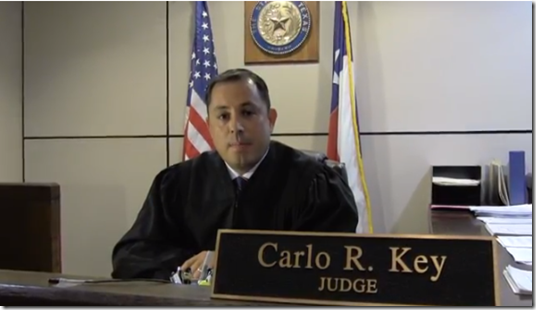 Texas Republican Judge Carlo R. Key has decided to leave the Republican. It is likely an action that will continue as the Republican Party continues to become ever so more extreme. Many view Texas as a solidly Red State because of past voting patterns. However as the Republican extremism and bigotry that is in full display in Texas by even mainstream Republicans are absorbed objectively, a trickle of party switchers will become a tsunami.

Judge Key pulled no punches in his disassociation. He said,

Rational Republican beliefs have given way to ideological character assassination. Pragmatism and principle have been overtaken by pettiness and bigotry. Make no mistake; I have not left the Republican Party. It left me. I cannot tolerate a Republican Party that demeans Texans based on their sexual orientation, the color of their skin, or their economic status. I will not be a member of a party in which hate speech elevates candidates for higher office rather than disqualifying them. I cannot place my name on the ballot for a political party that is proud to destroy the lives of hundreds of thousands of federal workers over the vain attempt to repeal a law that would provide healthcare to millions of people throughout our country. .. I would hope that more people of principle will follow me.

In an interview with MSNBC Thomas Roberts, Judge Key said that the last straw occurred when as a Republican he was to attend a news conference. In that news conference San Antonio Councilwoman Elisa Chan was to take hard questions for her homophobic remarks. He was to attend it to support her. He said he went into his car but just could not do it. He said her hate speech was one of the things that made it clear he had to consider his values. He said, “People in the middle may not fit in the Republican Party, maybe across the nation most especially where I am locally.”

Judge Key’s words are prescient. He said, “I will not be a member of a party in which hate speech elevates candidates for higher office rather than disqualifying them.” Elisa Chan, the catalyst for him leaving the GOP is now running for Texas Senate.

Given the highly partisan, homophobic, bigoted, and anti-poor rhetoric that dominated the Republican Party in Texas, one should expect to see more Republicans following Judge Key. Wendy Davis, a popular, charismatic, and tough Democratic candidate for governor in Texas may be the nudge many need.

Texas Democrats looking to expand their base and the electorate in general are rolling out the welcome matt for Key:

Look at the vote last week in Congress — where every single Texas Republican voted in favor of keeping the government closed and keeping Texans out of work without a paycheck. It was a vote of ideology over pragmatism and principle.
This is exactly the problem with Texas Republicans, who care more about doing what’s best for them instead of what’s best for us. That’s why we’re fighting so hard to take the partisans in power out of office in Texas and in D.C.

We want to personally welcome Judge Key to the Democratic Party and recognize his courage in making this decision. Judge Key has proven to be a fair and principled judge and we know that this decision was made with much thought and deliberation.

Today’s decision by Judge Key is more proof that the Texas GOP is a party in decline. It’s not surprising since the Republican Party has been taken over by radicals, driving more and more folks to believe that Texas Democrats have the right approach to governing.

Senator Ted Cruz put hundreds of thousands of folks and businesses out of work by forcing a government shutdown; Lt. Governor David Dewhurst made promises to take away educational benefits from Latinos; Governor Perry vetoed Texas’ law that would have ensured women receive equal pay for equal work in our state.
Texas Democrats work every day to put Texans first and create the opportunities that allow folks from every walk of life to pursue their American Dreams.