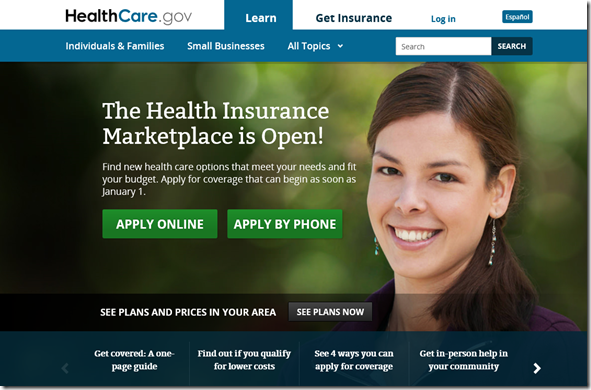 Healthcare.gov Will Be OK. Medicare Drug Plan Had Problems And Now Loved

Major new government initiatives always begin with major kinks. This is not new. It is for this reason that the response to the healthcare.gov website glitches is so disconcerting. It is expected that the Right Wing Tea Party sect of the Republican Party would use the buggy website as a launch pad for new attacks. Sadly but not surprisingly, the left has been just as bad. What is worst is that they have adopted some of the same attacks on government in their narrative. It is as if they feel a need to cower to the Right Wing for their criticisms after the government shutdown.

The Social Security Act of 1935 had a big problem. They had to reach 26 million people in less than a year. Too many people had the same name. They needed some network to reach people. A management expert was brought in who said it was impossible for the government to run the program.

The 1936 Republican Presidential nominee called the Social Security program a “cruel hoax” and a “fraud on the workingman”. He said it would not live up to its promises. Sounds familiar?

The management expert, Harry Hoff was told to get back to work and come up with a solution. The solution was ingenious. They created a unique social security number that coincides with one’s location. Postal workers at 45,000 post offices were then used to distribute applications. Unforeseen problems were solved.

The Supplemental Security Income program (SSI) had similar problems. They had computer problems that delayed signups to the program. In 1976, only 4.3 million people had signed up when an estimated 7.2 million were eligible. Sounds familiar?

Medicare's new prescription drug benefit is off to a rocky start. Dozens of plans, overloaded computers and an entirely new system have left seniors nationwide scratching their heads. The problems are particularly serious for the 6.5 million low-income Americans who get both Medicare and Medicaid — and whose Medicaid drug coverage ended Dec. 31.

Turns out the computer system was providing incorrect prices for prescriptions. Pharmacist would be on the phone for hours trying to contact Medicare. They resorted to turning people away or giving them a few pills to tie them over.

These examples are not provided as an excuse for the Obama administration’s failure to produce a less buggy healthcare.gov. It is not meant to minimize the potential real problems both in the user interface and the backend. It is made to illustrate that big rollouts are more likely than not to have big problems. Ultimately the problems are resolved and the good of the program realized.

The Obama administration bears the ultimate blame for the faulty rollout. However, the concerted effort of Republican governors to sabotage Obamacare must be considered the genesis. The expectation was that each state would run their exchanges. When most Republican governors whose states were capable, neglected their duties, additional burdens were placed on the design of healthcare.gov.

Healthcare.gov is a complex piece of software. It depends on computers communicating with different federal databases, private databases from insurance companies, state databases and state regulations, and much more. Additionally it must understand different types of households, eligibility, and financial statuses. The permutations that occur in effectively giving one person or one family insurance are enormous.

Many have said the launching should have been delayed. It is easy to say that if one is insured. For the millions who need help now, that is not an option. When the president says Obamacare is not a website he is correct. Obamacare is an affordable health insurance program. The website is one form of access to that program. There is also access by phone, mail, and through navigators.

Reporting on the healthcare.gov problems is another illustration of an incompetent traditional media. The parts of Obamacare that affects most or every American, no more rescissions, no more caps, children up to 26 on parents’ policies, reduce drug cost for seniors, preventative care, and a host of other consumer protections are in effect. Exchanges in states are enrolling people just fine (e.g., New York, California, Kentucky, Washington, etc.)

The narrative from the mainstream media fails to reflect that while healthcare.gov is buggy, it is functional. They fail to give the narrative that had America settled on a single payer system, the complexities and inefficiencies would be nonexistent. Their biggest failure is that by not giving historical context to the rollout, they are scaring many Americans. These are Americans that finally saw a government working for them.