Who could forget the Rant from Rick Santelli. There he was on the Chicago Mercantile Exchange at some trading desk ranting against the Obama administration pondering helping those with ridiculously high mortgages. He claimed that doing so would encourage bad behavior. He then solicits a response from fat car traders. Afterwards he states these traders represented America. Really? These traders believe they represent America? In their cocoon they believe their job of moving a piece of paper or money warrants their exorbitant salaries. They think their work is more valuable than the engineer, doctor, lawyer, social worker, cop, etc.

Was This Really The Genesis of The Tea Party?

The lazy corporatized media of course pretty much went with the ‘Koch’ narrative that Santelli’s rant was the genesis of the Tea Party movement. They did not see it as simply a rant that was used as a new entry point.

Well there is an investigative historian that seems to have done the job of connecting the dots. Eric Zuesse wrote a Huffington Post piece everyone should read. It details the patience and notoriety of the real creators of the Tea Party Astroturf movement.

He found a Tea Party website that is a crumb trail to the present. This was way back in 2002. It illustrates the methodical path the group has taken by morphing and adapting all while under the control of the same group of billionaires. 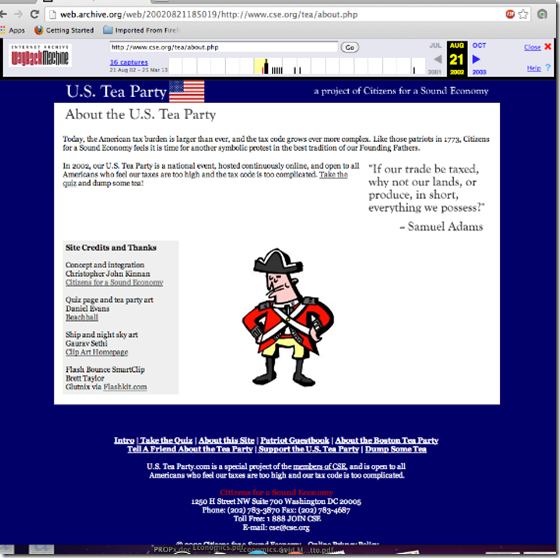 The Koch-founded-and-run Citizens for a Sound Economy (shown there as running this “Tea Party”) subsequently divided itself into two parts: FreedomWorks, and Americans For Prosperity. Both parts ardently pushed the Tea Party “movement” (which didn’t yet exist).

Then, on November 8, 2006, their coming website was announced specifically in Chicago, as the “Sam Adams Alliance”:

In fact even before the real thought that a President Barack Obama could be a reality, the wheels were already turning.

During the closing years of George W.Bush’s presidency, the Sam Adams Alliance actively educated (or propagandized) their followers, including a “Meetup with Americans For Prosperity-Illinois” on December 19, 2007.

And then there was President Obama.

Then, Barack Obama was elected president, and The Sam Adams Alliance (still only a Chicago organization) advertised for unpaid workers or “interns” to “apply through the Koch program”:

Then came the rant. Of course the rant was used as that entry point. Welcome Tea Party to all.

The extremely conservative Rick Santelli was on the floor of the Chicago Mercantile Exchange during this time, on 19 February 2009, telling CNBC’s very conservative audience that Obama’s proposed economic stimulus caused America’s Founders to be “rolling over in their graves,” and at 2:12 in the video, he urges that there be a “Chicago tea party in July,” but he does not actually mention the “Tea Party,” nor does he mention by name Sam Adams.

Finally, the Kochs’ own astroturf “grass roots movement” became very public and active at the Koch-created FreedomWorks: unmistakably, this is the “Tea Party Movement” as we know it.

One must not forget that much of this was reported with little fanfare in the piece “Exposing The Rightwing PR Machine: Is CNBC’s Rick Santelli Sucking Koch?” by Mark Ames and Yasha Levine. Zuesse’s piece is worth the read. There is one paragraph that is emblematic of today’s incompetent traditional media.

Many journalists care so little about it so that, for example, Jacob Weisberg, the Chairman and Editor in Chief of the Slate Group, in a October 13, 2011 article titled “Occupy Wall Street and the Tea Party: Compare and Contrast,” opened:

“The Tea Party movement began on Feb. 19, 2009, when Rick Santelli, the CNBC financial journalist who reports from the floor of the Chicago Mercantile Exchange, ranted against the government bailing out homeowners who couldn’t pay their mortgages.”

He portrayed both groups as grassroots movements. He closed:

“As spontaneous, unpredictable movements, … they have more in common than meets the eye.”

Some in the press, such as Rupert Murdoch, cooperate knowingly with the Kochs and their friends. Others do it because … because what? Is there an excuse for that? Should it even be called by the name “journalism”? Or perhaps instead: “propaganda.”

Sadly the traditional media can no longer be considered that source of objective information. They are spun by lowly politicians, the Plutocracy, and the corporatocracy. The new media is the only hope to ensure the scourge that is the Tea Party on America is defeated.