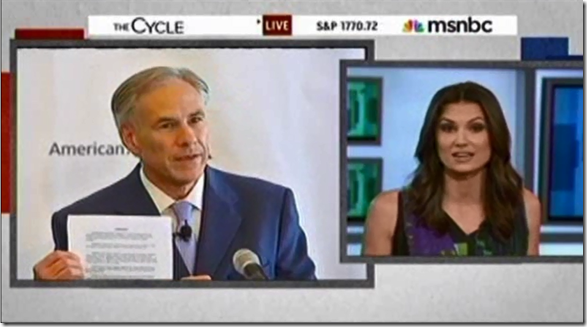 Krystal Ball provides a poignant ‘expose’ on Greg Abbott, the likely Texas Republican Gubernatorial nominee.  She makes the point that Greg Abbott who is vying for governor of Texas has misguided priorities.

Texas is the state with the highest percentage of uninsured residents. It also has one of the highest poverty rates in the country. Education in Texas compares poorly with other states.

Ball highlights that instead of advocating for or solving real problems, Greg Abbott is addressing fake problems. Greg Abbott has been unable to find intentional voter fraud in Texas. Yet, he re-instituted the Voter ID law that was blocked by the US District Court in Washington. He used the Supreme Court’s ruling making Section 5 of the Voting Rights Act unconstitutional as his license to discriminate. This law will discriminate against women, minorities, and the elderly.

Here’s a typical workday for Texas’ attorney general: “I go into the office, I sue the federal government and I go home,” Greg Abbott was quoted as saying to a tea party group in an April 30, 2013, Associated Press news story. …

In our count of five “wins,” four lawsuits were against the Environmental Protection Agency and one against the Federal Energy Regulatory Commission. The EPA has appealed one ruling to the Supreme Court, and FERC filed for a clarification of the judgment in its case.

In most of the 27 cases, Texas was the lead plaintiff or only plaintiff. These included lawsuits in which Abbott was acting at the request of a department or branch of Texas state government. Bean said, “We file them on behalf of state agencies. We’re the lawyer, they’re the client.”

Ball points out that Greg Abbott is likely a big problem for many women. He will make ‘flea market abortions more common.

One should not forget that Greg Abbott is also a climate denier. He makes Texas the laughing stock of the southwest.

Texans should not despair. Texans are in fact waking up. One need only see the reception Texas Democratic Gubernatorial candidate Wendy Davis is getting throughout the state. As she highlights the nut that is Greg Abbott, her path to Texas Governor is clearer.