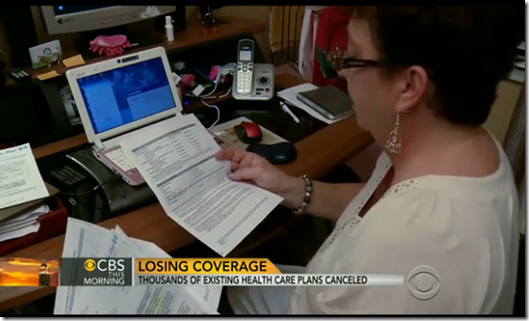 Who can forget the CBS News story by Jan Crawford? Crawford should be ashamed of her report. It made her look like a Republican hack. She went from a journalist to just parroting Republican talking points reinforced by an uninformed citizen.

First she simply says people are finding out that their plans are being cancelled because it is not comprehensive enough to qualify under Obamacare. That is not only misinformation, it is a lie. Obamacare only apply for policies that changed. ALL old policies are grandfathered pre March 23rd, 2010.

Grandfathered plans are plans that were purchased before March 23, 2010. These plans have a grandfathered status and don’t have to follow ObamaCare’s rules and regulations or offer the same benefits, rights and protections as new plans.

From the WaPo via DailyKOS

Let’s start with the very basics here. About 15 million people purchase health insurance policies on the individual market. That’s about 5 percent of the population. When they do so, they typically purchase a 12-month contract with an insurance company. And when that contract runs out, both the individual and the insurance plan have an escape hatch. The individual can decide to no longer purchase the plan — and the insurance company can decide to no longer offer the plan.
…
There are some restrictions on how insurance companies can terminate products. HIPAA, a health law passed in the 1990s, does require that insurance companies offer subscribers the opportunity to renew their policy, so long as they continue to pay monthly premiums. If they want to discontinue a subscriber’s policy, the insurance plan must provide 90 days’ notice and “the option to purchase any other individual health insurance coverage currently being offered by the issuer for individuals in that market.”
And these are the notices that insurance plans are sending out right now, to hundreds of thousands of subscribers: notices saying that they do not plan to offer the policy anymore, and information about what policies will be available.
(emphasis added)

Jan Crawford used Dianne Barrette as her Obamacare victim as she continued the Republican misinformation. Dianne’s health insurance policy was cancelled. The insurance company told her the new policy would cost $590 per month. That is more than ten times the amount she was paying, $54/mo.

Instead of doing the necessary journalistic research, Crawford was lazy and made that the story. If she was doing her job, she would ask why the insurance company was coercing this woman into an expensive policy and not one on the exchange more in line with her current bill. If she was a real journalist she would have gone onto the Kaiser Subsidy Calculator. It does not require the use of healthcare.gov.

It turns out that when a real journalist looked into Dianne’s case, she could get real insurance from the exchange that would cost her $100 a month. It includes hospitalization. It includes free wellness doctor visits. While it has a $6250 deductible, she has full security and immunity from bankruptcy going forward. She can actually get sick as well as get preventive screenings. For a few more bucks a month she can further drop the deductible.

Obamacare victim not a victim after all.

The real journalist gave the information to Dianne and wrote the following.

Barrette’s take is a reminder that people can have a longer-view perspective about medical bills than pundits frequently assume. When I gave her a broad description of the plans available, she seemed interested. I noted that she’d be paying $100 or $150 extra a month for policies that still had high cost-sharing, so that she would still be a lot of money out of her own pocket. (I also made very clear that I’m not an insurance agent or broker—that, when she finally goes shopping for insurance, she should talk to a real expert for advice.) Here was her response: “I would jump at it,” she said. “With my age, things can happen. I don’t want to have bills that could make me bankrupt. I don’t want to lose my house.”

Dianne is no longer an Obamacare victim. She is now informed and know she has options.

Obamacare is not a panacea yet. It will be when it is converted to an efficient Medicare for All system. Obamacare is however orders of magnitude better than the current system. Dianne was not an Obamacare victim. She was a victim of an effective lying Republican Party and irresponsible journalists parroting those lies.