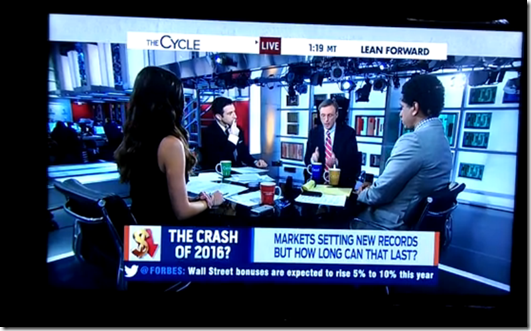 Thom Hartmann was on MSNBC’s The Cycle plugging his new book “The Crash Of 2016:The Plot to Destroy America--and What We Can Do to Stop It”. Hartmann states that America’ wealth at one time came from creating things. He said because most of the wealth is made from manipulating money, America is living in huge bubble. Thom Hartman said that the Tea Party and Occupy Wall Street were populist type movements with similar gripes albeit different values.

Later in the segment Toure stated the fact that the wealthy had amassed an inordinate amount of wealth. He said that wealth of a few was larger than ever in the country’s history. Toure said that that wealth means the power of the people would never be realized.

Thom Hartmann responded in agreement. He then gave the example of the effect the song “Eve of Destruction” by Barry McGuire in the 70s during the Vietnam war. That song had the phrase ‘You are old enough to kill but not for voting.” Thom Hartmann said that song in six months ignited a movement that effected a constitutional amendment to change the voting age.

He then credits Move to Amend as the type of organization that could lead such a movement. He went on to describe the success Move To Amend has had mobilizing the movement. Thom Hartmann then mentioned that states have already passed nonbinding resolutions that money is not speech and that corporations are not people.

We the People, Not We the Corporations

On January 21, 2010, with its ruling in Citizens United v. Federal Election Commission, the Supreme Court ruled that corporations are persons, entitled by the U.S. Constitution to buy elections and run our government. Human beings are people; corporations are legal fictions.

We, the People of the United States of America, reject the U.S. Supreme Court's ruling in Citizens United and other related cases, and move to amend our Constitution to firmly establish that money is not speech, and that human beings, not corporations, are persons entitled to constitutional rights.

The Supreme Court is misguided in principle, and wrong on the law. In a democracy, the people rule.

We Move to Amend.

". . . corporations have no consciences, no beliefs, no feelings, no thoughts, no desires. Corporations help structure and facilitate the activities of human beings, to be sure, and their 'personhood' often serves as a useful legal fiction. But they are not themselves members of “We the People” by whom and for whom our Constitution was established."