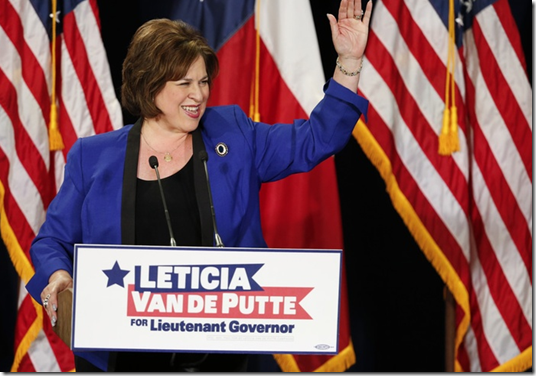 Texas women are ready to fight back. The Republican establishment has been in a continual war with women for several years.

Today Texas Senator Leticia Van De Putte announced that she will be running for Texas Lieutenant Governor. A few weeks ago Wendy Davis announced she was running for Governor. At the top of the ticket in Texas will be two strong women.

Ms. Van De Putte said, "I want to be your lieutenant governor because Mama ain't happy — because Texas, we can do better." According to the Texas Tribune,

On stage in a San Antonio College gymnasium, where her campaign estimated about 500 supporters gathered, the six-term Democratic senator did not shy from attacking the state’s Republican leadership, which she said had forgotten about mainstream Texans.

"For years, the governor's been too busy trying to president, and for years the lieutenant governor's been trying to be in the U.S. Senate — nobody's been minding the store," Van de Putte said. "We cannot afford to keep kicking the can down the road because some Republicans are afraid of their primary voters."

Van De Putte said that while she knew her opponents would say the race is not winnable, she will be running to win it.  Van De Putte is considered a centrist in Texas while Wendy Davis leans more Liberal. Both of them are in tune with the grassroots of the state, more so than any Republican.

Women in Texas mean business. If they show up at the polls in November 2014, Texas will be led by two strong women. Wendy Davis will be Texas governor. Leticia Van De Putte will be Texas Lieutenant governor. That will send a message for the presidency in 2016, women have arrived electorally.