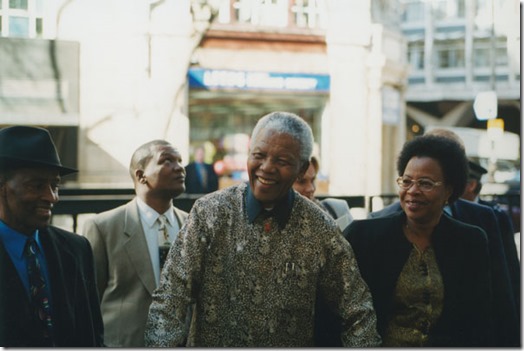 Nelson Mandela, the anti-apartheid icon that went from political prisoner to president of a free South Africa died today. Nelson Mandela spent 27 years in jail. Yet, he brought South Africa from the evil of apartheid to democracy with grace and humility. He was the calming factor that prevented vengeance by the aggrieved.

"He is now resting. He is now at peace," current South Africa President Jacob Zuma said. "Our nation has lost its greatest son. Our people have lost a father."  Zuma said, "What made Nelson Mandela great was precisely what made him human. … We saw in him what we seek in ourselves.”

Nelson Mandela was a founding member of the African National Congress Youth League. The Afrikaner nationalists of the National Party came to power instituting apartheid in 1948. Nelson Mandela rose to prominence in 1952 during the ANC’s Defiance Campaign.

Mandela worked as a lawyer and was repeatedly arrested for seditious activities. Ultimately Nelson Mandela was convicted in 1962 of sabotage and conspiracy to overthrow the government and was sentenced to life in prison.

Nelson Mandela spent 27 years in jail. Yet when he was released after apartheid was in its unsustainable stage, he emerged as a peaceful leader. He showed no animosity to his oppressors. He brought a nation, black and white together. The actuality of the love and camaraderie displayed in the video below, a rainbow of South Africans singing as they mourn his death, is probative.

President Obama came out to address Nelson Mandela’s death at the Whitehouse. He was visibly somber. Nelson Mandela was not only his friend but someone that had a material effect on his political awareness and activism.

President Obama quoted Nelson Mandela. “I have fought against white domination. And I have fought against black domination. I have cherished the ideal of a democratic and free society in which all persons live together in harmony and with equal opportunities. It is an ideal I hope to live for and to achieve. But if needs be it is an ideal for which I am prepared to die.”

President Obama said Nelson Mandela achieved more than could be expected of any man. “We have lost one of the most influential, courageous, and profoundly good human beings that any of us will share time on this  earth,” he said. “His journey from a prisoner to a president embodied the promise that human beings and countries can change for the better,” said the president.

President Obama stressed that Nelson Mandela was gracious as he came to power without animus towards his jailers. He said what made him that much more remarkable is that he did it all with humor, grace, and humility. The president said that one of his first political actions in fact was an anti-apartheid action.

Here is the video with  the president’s statement.

Nelson Mandela’s stature is that more elevated when placed into context with our own political dysfunction. That he was able to unite a nation that breathed a carnal racial hate among  its citizens make our political problems seem petty.