A Pasadena, TX High School  teacher was charged with felony indecency with a child and improper relationship with a student. Paul Edward Tate is a 36year old History teacher at Pasadena Memorial High School. The female student with which he was having a relationship with is 16 years old. 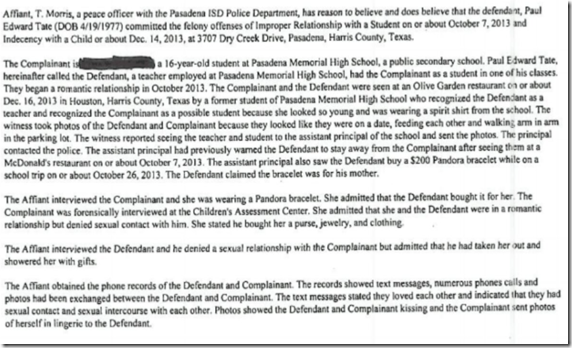 According to ABC13, a former student saw Paul Edward Tate and the 16 year old student on December 16th at a restaurant. The former student reported that the two were feeding each other. They were walking arm in arm in the parking lot.

The former student took pictures and subsequently reported it to the school’s assistant principal. The principal then contacted the police.

When the police interviewed the 16 year old student, she admitted that Paul Edward Tate bought the Pandora bracelet for her. She also stated they were in a romantic relationship. She said however the relationship was not sexual.

Police review of text messages between Paul Edward Tate and the teacher indicate there was sexual contact. They also exchanged photos. The student sent Tate photos with her in a lingerie.

Paul Edward Tate was a popular and very liked teacher around campus. He has been teaching History since 2009. His bail for the two charges total $40,000.

The following statement was issued by Pasadena Independent School District.

"A Pasadena Memorial High School history teacher has been charged with indecency with a child and improper relationship between educator and student. Both of these are second degree felonies. The alleged incidents did not happen at the school.

Just before the winter break, Pasadena ISD received a report of a suspected inappropriate relationship between a Memorial High School teacher, Paul Tate, and a 16-year old student. Immediately upon hearing the allegations, Pasadena ISD placed the teacher on administrative leave while law enforcement personnel investigated.

Our primary concern is always the welfare of our students. Therefore, the district removed the teacher from the educational environment and has arranged for a smooth transition for continued teaching and learning in a secure environment.

Any time an educator is accused of an improper relationship, it's important to make sure that the situation is reviewed thoroughly.

The educator-student relationship is an important one. Anytime an educator breaks the rules concerning that relationship, it makes it more difficult for all teachers who care about kids and want to do what is right for them. We will continue to work together to provide a safe and appropriate environment where children can learn."