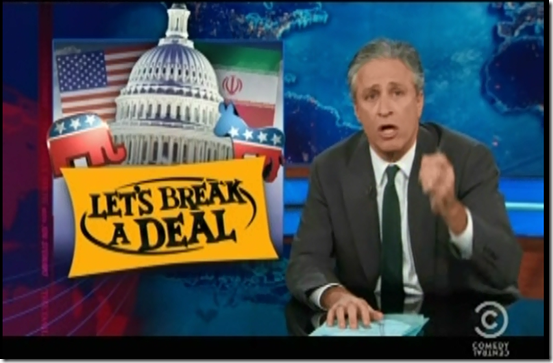 Jon Stewart hit a home run today with one of his best satirical analysis of Congress. At first it seemed he was going to make fun of the shallowness of the Traditional Media. Ultimately it was the childishness of Congress that got his wrath.

He starts with relaying two stories that headlined the Traditional Media a couple of days ago. The first  story was Iran coming to an agreement with the international community to curb its nuclear program. The second story was the Los Angeles County sheriff deputies searching Justin Bieber’s house for evidence in a felony investigation of the egging of his neighbor’s home. Jon Stewart said the two stories are more closely related than one would imagine.

In the Justin Bieber story, the sheriffs searched his home and ended up arresting someone true to form the black guy. “Boy ain’t that the American system of justice,” said Jon Stewart. “Wow, how ‘bout that. Here is what happened. White guy breaks some sh*t, cops come and take the black guy  away.”

In the Iran story, “For the first time in decades, we would have diplomatic relations with Iran,” said Jon Stewart. “and a means of ensuring that they would not obtain a nuclear weapon just as long as no one comes in and figuratively throw eggs at the entire thing.”

Congress exposed for their level of childishness.

Jon Stewart then segues to CNN reporting that lawmakers in the Senate were readying to pass more sanctions on Iran. “And there you have it,” said Jon Stewart. “That is how these two stories are related. Congress is the Justin Bieber of our government.”

Jon Stewart goes on to make some serious points in his perennial funny manner. He noted that sanctions were placed on Iran to bring them to the table. Now that they Iran is at the table, it seems silly and ill willed to apply even more sanctions given that it runs the risk of derailing the entire endeavor. He revealed the obvious, those attempting to impose more sanctions are acting in the interest of Israel through AIPAC.

In a rather funny irony, he falsely attributed the rather disrespectful statement issued by Israeli defense minister Moshe Yaalon to Iranian President Hassan Rouhani. Moshe Yaalon said, "American Secretary of State John Kerry, who turned up here determined and acting out of misplaced obsession and messianic fervor, cannot teach me anything about the conflict with the Palestinians."

Jon Stewart may have subliminally wanted to equate his initial false attribution of the statement to Hassan Rouhani with the arrest of the black kid at Justin Bieber’s home. Ultimately Jon Stewart intent was to show the pettiness of Congress specifically and politicians in general.

Check out the video below.