This Is How We Defeat Citizens United 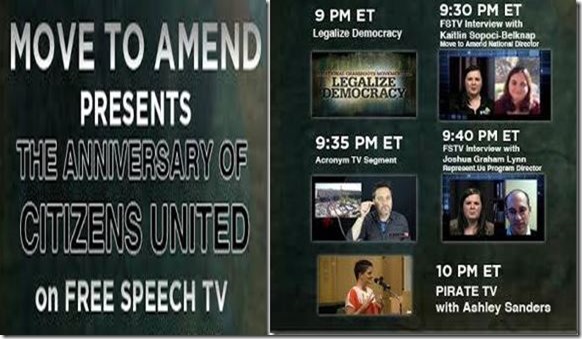 January 21st, 2014 is the 4th anniversary of the infamous Citizens United Supreme Court case. Citizens United is the case that opened the door much wider for corporations and the wealthy to take away our Democracy.

Supreme Court Justice Stevens had the most prescient dissent to the Citizens United ruling. He concluded the following.

At bottom, the Court's opinion is thus a rejection of the common sense of the American people, who have recognized a need to prevent corporations from undermining self government since the founding, and who have fought against the distinctive corrupting potential of corporate electioneering since the days of Theodore Roosevelt. It is a strange time to repudiate that common sense. While American democracy is imperfect, few outside the majority of this Court would have thought its flaws included a dearth of corporate money in politics.

There are many organizations working to educate and mobilize Americans. They know what's needed to make Citizens United moot. That ultimate goal is a constitutional amendment that codifies that money is not speech.

To be complete, it is imperative that a constitutional amendment include a specific clause. It must state that a corporation is not a person. It must be codified that a corporation does not inherently have inalienable rights like human beings. That eliminates the possibility of the Bill Of Rights as a made up defense for any corporation.

Move To Amend is the organization that provides all of these tenets. Within its vision is a constitutional change that must occur. Move To Amend will have two hours on Free Speech TV on Tuesday.  Anyone who is interested in preserving our democracy must watch.

Watch it and spread the word.