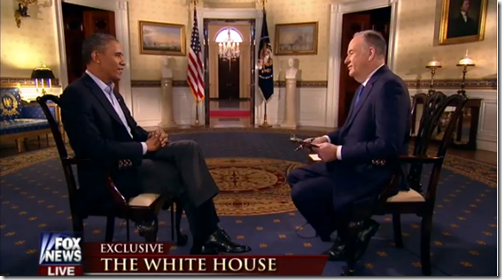 President Obama was interviewed before the Super Bowl by Fox News’ bully Bill O’Reilly. Unlike other Fox News interviews, the president seemed prepared and ready for an unapologetic combat. The president did not allow Bill O’Reilly to dictate the pace or completeness of the answers he intended to give. It seemed to have taken Bill O’Reilly off his more belligerent stance.

The President used Bill O’Reilly’s question about the original dysfunction of healthcare.gov to tell Americans that the website is working fine. He also used the opportunity to let Americans know that over 3 million people had signed up so far, 6 million plus signed up for Medicaid, and  3 million young people under 26 on parent’s plans. The president also reiterated that most would get better insurance. He refused to get caught up into enumerating mistakes as Bill O’Reilly wanted him to do. “I try to focus not on the fumbles,” the president said. “But on the next play.”

Bill O’Reilly then moved on to Fox News’ obsession, Benghazi. The president did not answer Bill O’Reilly’s leading questions. He simply relayed the facts about Benghazi. He did not allow Bill O’Reilly to bully responses in the way he wanted. President Obama answered them with his own narrative. Bill O’Reilly told the president that his detractors believe that he did not tell the world it was a terror attack because the campaign did not want that out. Bill O’Reilly was repeating the mistake Mitt Romney made when attempting to call out the president about the use of the term terror. The president used that opportunity to slap Fox News for its misinformation. “Bill, think about it,” the president said. “They believe it because folks like you are telling them that.”

Bill O’Reilly was eager to get to another one of Fox News faux scandals. This time it was the IRS. The president categorically denied there was any wrongdoing whatsoever. He said hearings had disproved any wrongdoing. When Bill O’Reilly continued to press, he used the opportunity to slap Fox News once more. “These kinds of things keep on surfacing,” the president said. n part because you and your TV station will promote them.”

Bill O’Reilly and Fox News were the Broncos in the interview with President Obama.

President Obama did not come close in his prognostication of the Super Bowl score. He believed the teams were evenly matched. He predicted the score would be 24 to 21. President Obama was not only wrong on the score. He was wrong on the Super Bowl teams being evenly match. The game was a rout with a 43-8 score that could have easily been 57-0. One must be happy that the president’s competency is in policy and not sports. Bill O’Reilly was outmatched in the interview.