Elizabeth Warren speaks truth to the GOP and to Americans 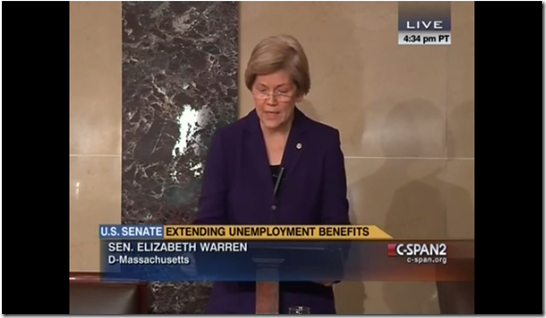 Senator Elizabeth Warren went on the Senate floor on Monday evening with the passion to inform through clear lenses. She blasted the GOP for blocking an extension of the federal unemployment insurance that expired at the end of last year.

Elizabeth Warren began by reminding senators what brought the country to this point. “Just five years ago middle class families got hammered by the worst economic crisis since the Great Depression,” she said. “These families didn’t cause the crisis. They worked hard and played by the rules. But they ended up paying the price for Wall Street’s wild risk taking and Washington’s failed oversight. People lost jobs, lost savings, lost homes.”

She goes on about the reality of poor and middle class Americans. Elizabeth Warren goes on to talk about the impact the lack of unemployment insurance is having on them.

The same government that allowed the crash because of lax regulations on the corporatocracy is creating additional pain to the out of work poor and middle class. This government was willing to step in, not in months but in days, to assist the corporations that brought the crisis upon themselves. Yet, the current Republican Congress and Senate are forcing Americans to go through hoops to help those who can least help themselves.

“Because of Republican filibusters, 1.6 million Americans and counting have lost access to unemployment insurance since the end of last year,” Elizabeth Warren said. “including more than 60 thousand people in Massachusetts. Their obstruction means that we cannot fulfill our commitment to the families that need it most. My Republican colleagues should be looking for a way to say yes. Yes to helping middle class American families and their 2.3 million children who rely on unemployment insurance. But once again they just want a way to say no.”

Elizabeth Warren made some salient points.

Elizabeth Warren gets to the real problem, ideology.

Elizabeth Warren then got to the real problem. The problem is ideological. Republicans believe at their core that unemployment insurance is bad. She reminded listeners that one Republican senator said that emergency unemployment insurance does a disservice to people because it causes them to “become part of this perpetual unemployed group in our economy.” She also reminded her colleagues of Republican Congressman Paul Ryan’s statement. He said that federal safety net programs like unemployment insurance are “like a hammock which lulls able bodied people into lives of complacency and dependency.” Elizabeth Warren characterizes these justifiably as insults to hard working people across the country.

Senator Warren read a letter from a taxpayer who did her part. She paid taxes for decades including unemployment insurance. She loses it when she needs it the most.

Elizabeth Warren's most prescient statement is this. “Wall Street and Washington caused the financial crisis but Main Street is still paying the price,” she said. “And there is the rub. Republicans line up to protect billions in tax breaks and subsidies for big corporations with armies of lobbyists. But they cannot find a way to help struggling families get back on their feet.”

Listen to her excoriation of her colleagues below.

Elizabeth Warren is correct. Most of those dependent on unemployment insurance are not looking for a handout, they are looking for a hand up, an opportunity to rebuild their lives. Their lives were destroyed by a purchased government and a heartless Plutocracy.

Walmart, the store where much of the poor, the working poor, and middle class still shop, had a slump in profits coincident with food stamp (SNAP) cuts. It is likely that the corporate masters may force these politicians into gear lest their businesses suffer more. It is not about the pain to humans, the average American, but the pain to businesses that concerns many of these politicians.

Irrespective of the ultimate result of the unemployment insurance battle, Americans must organize. They must ensure that they elect responsible, empathetic, moral leaders starting in 2014. No one should sit out the 2014 elections.