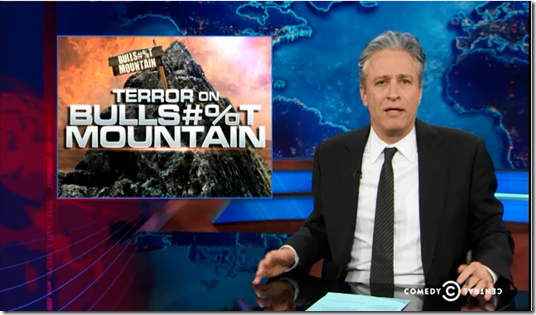 This week it was all about the new CBO Report. Most of the Traditional Media, from Fox News’ airheads Sean Hannity, Stuart Varney, to their resident ‘political and economics genius’ Elizabeth Hasselbeck were in misinforming mode. From CNN’s Wolf Blitzer to ABC’s Diane Sawyer, the hyperventilating was in full vogue. It was a pleasant surprise to watch CNN’s Carol Costello do a fact base piece on the CBO Report.

But then Jon Stewart entered the fold to provide fun, comparative reality, and context. He did it in the manner only Jon Stewart is capable of doing.

In the first video Jon Stewart shows the talking heads lying about what the CBO Report said.  He followed it up by statements validated by the CBO Director Douglas Elmendorf who refuted the previous lies about the report.

The second video illustrates the hypocrisy displayed by the Republican politicians disparaging Obamacare based on the CBO Report. Obamacare stops a problem Republicans have been talking about for a long time, job lock. Job lock is the term used to describe an employees’ inability to leave an employer because of the loss of benefits they are unlikely or incapable of getting elsewhere. This could be the inability to get new health insurance because of a preexisting condition or affordable health insurance on the individual market.

Jon Stewart shows Paul Ryan complaining about job lock pre-Obamacare and then disparaging Obamacare. Obamacare solves job lock as stated in the CBO Report because American now have affordable healthcare options on the exchanges. The CBO Report does not say jobs are going to be lost. It implies people will choose to reduce hours because they are no longer slaves of the corporation in order to get healthcare.

CBO Report stops job lock which use to be a Republican tenet.

The third video calls out the hypocrisy of many in the GOP that preach family values. The CBO Report makes it clear that Americans will have the freedom to work less because they have other avenues to get affordable healthcare insurance.  This was mocked brutally on Fox News.

When family clashes with Capitalism around the holidays conservatives throw family overboard.

Jon Stewart is able to make a very serious and important subject funny. It is essential that the hypocrisy is not lost. It is important that every American understand that absent Obamacare they would still be tethered by an employer whose interests may not include theirs. Americans now have the freedom of choice. The employer/employee balance of power is improving. Now it is time for every American to engage. Employees must unionize to ensure complete and equal bargaining power. That is how the working middle class succeeds.