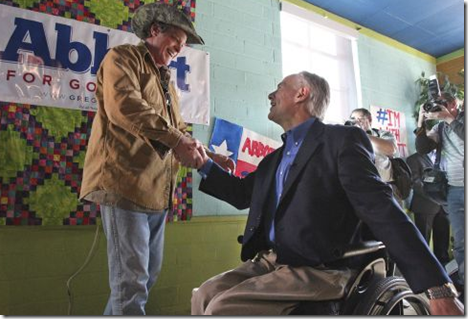 Presumed Republican gubernatorial nominee Greg Abbott campaigned with President Obama hating racist Ted Nugent. They praised each other as fighters for freedom. Greg Abbott should know better. In a diverse state like Texas, why would he stoop to such a divisive act?

“We don’t have to question Greg Abbott’s courage — because he invited me here today,” Nugent told the crowd at El Guapo’s restaurant in Denton. The two were scheduled to appear again later in Wichita Falls.

Nugent called Abbott “the epitome of what our founding fathers wanted as a representative of ‘we the people,’” and said Abbott has an understanding of individual rights and has fought “the enemies of these freedoms.” He introduced Abbott as “my friend” and “my blood brother.”

Abbott called Nugent “a fighter for freedom in this country.”

Sen. Wendy Davis, the presumed Democratic nominee, kept up the criticism of the joint appearance in a statement, saying, “Greg Abbott’s embrace of Ted Nugent is an insult to every Texan — every man, woman, husband, and father. If this is Greg Abbott’s idea of values, it’s repulsive.”

Greg Abbott continues to make Texas the laughing stock of the country. He continues the stereotype of a Texas that is dumb, racist, and intolerant. That isn’t the Texas most of us live in. However because most eligible Texans do not vote, we have allowed quackery to rule.

If after the election in 2014 we are left with the same cast of characters, then only Texans will be to blame. I have faith that we will do better this time.