Chokwe Lumumba at his inaugural address in 2013 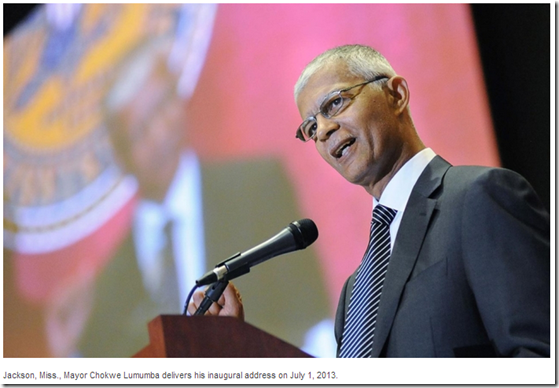 The mayor of Jackson Mississippi Chokwe Lumumba died of heart failure on Tuesday.

Lumumba, who died Tuesday at age 66 of heart failure, took office last July in a city coping with the long-term effects of middle-class flight and infrastructure decay. He was a proud black radical. Only the third black mayor of Jackson, he was also by far the most prominent leader of a major city to come from the black revolutionary movement. His commitment was forged in the Republic of New Afrika (RNA), the social movement that aimed to turn the Deep South into an independent black nation, and was upheld throughout his career as an activist and radical attorney. [Al-Jazeera]

Chokwe Lumumba moved to Jackson, Mississippi in 1971 as a Human rights activist. He attended law school in Michigan in the mid 1970s, he returned to Jackson in 1988.

Chokwe Lumumbaestablished a People’s Movement Assembly (PMA) in the ward he was the councilor for. David Cobb, National Spokesperson for Move To Amend (MTA) admired the Chokwe Lumumba’s work with PMA’s and their potential for creating people driven movements and governance. David Cobb said the following.

Chokwe Lumumba was a true "long-distance runner" for social justice, and the his passing is a tragic blow. His entire adult life was committed to creating a just society. As a lawyer, he represented the poor and oppressed, as well as political activists, including numerous Black Panther Party members.

In addition to his legal career, he was the co-founder of the Malcolm X Grassroots Movement, an organization dedicated to defending the human rights and self-determination of African Americans.

Chokwe Lumumba birth name was Edwin Finley Taliaferro. He has a storied history. He represented Tupac. He led the team that secured the freedom of the Scott sisters.

In his eight months as mayor, Lumumba maintained his balance between radicalism and pragmatism in a manner that suggested they were a natural combination. Confident and frank, he participated in a warm “conversation about community” with former Gov. Haley Barbour in November, and he gave the state legislature an effusive welcome at the start of its 2014 session. In truth, parts of his vision — the emphasis on self-determination and local enterprise — were compatible with small-business conservative ideas, if reached through a very different journey. [Al-Jazeera]

Chris Hayes presented a nice tribute to Chokwe Lumumba’s work in a segment  today. Very little coverage was given elsewhere.

Chokwe Lumumba intended to create jobs buy rebuilding Jackson’s failing infrastructure. He envisioned a people’s economy with local investment and employment. He intended to promote recycling, alternative energy and similar programs. He believed this would have ensured the city’s strength and autonomy.

Chokwe Lumumba will be missed. Had he lived to serve out his term, he would have shown how real progressive governance could rebuild a decaying city.