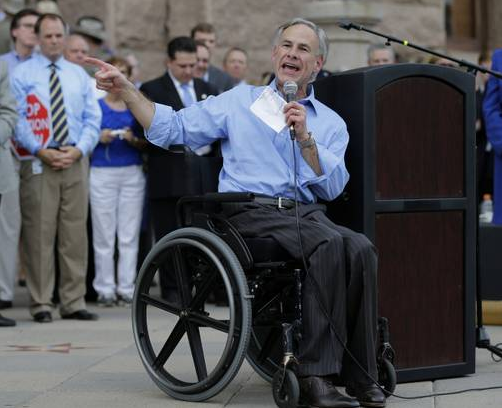 A 27 year old Greg Abbott was jogging in the upscale River Oaks Houston neighborhood in 1986. It was a windy day. A limb fell off of a tree and hurt him. The limb sadly crushed Greg Abbott’s spine and damaged his kidneys.

After the accident Greg Abbott sued both the homeowner and the tree care company. He won a very large settlement. He has collected $6 million so far.

The Dallas Morning News describes the settlement as follows.

Abbott sued the homeowner and tree care company and won a settlement, which shows tax-free annuities in graduated payments. The payments began with a $300,000 check in 1986. They include both monthly payments and lump sums that are deposited every three years.

All told, the agreement could be worth about $9 million. As attorney general, Abbott is paid $150,000 a year.

Greg Abbott championed legislation that limit lawsuits awards10 years ago. He claimed that anyone in his same situation would be eligible for the same award.

“If there were someone jogging today, got hit by a tree today, suffered the same kind of accident today, they would have access to the very same remedies I had access to,” he said.

But Abbott said the legal system in Texas was being abused.

“There were many invalid claims that were filed in court, that clogged up the courts, that either denied or delayed access for people who had valid claims,” he said.

Supporters say the reforms enacted have been good for Texas.

However, what is not true is Abbott’s assertion that all of the same remedies would be available today to a fellow Texan who suffered catastrophic injuries.

Since Abbott’s settlement, Texans for Lawsuit Reform, one of his most loyal and robust contributors, has been on a perpetual mission to eliminate the rights of catastrophically injured Texans.

The list of limitations that Texans for Lawsuit Reform has passed since 1986, with the help of politicians like Abbott, that would directly limit his claim if he were to make it today include limitations on medical care in the past, lost wages and punitive damages. Abbott’s settlement document specifically references punitive damages.

Based on this legal precedent, cases similar to Abbott’s are thrown out of court without a jury hearing them. While it is only known generally that a tree fell on Abbott, it is likely that the Texas Supreme Court would dismiss such a case.

If the Court ruled in that manner, Abbott or anyone with the same type of case would collect nothing today.

Catastrophically injured Texans now often find themselves without the legal remedies Abbott had at the time of his settlement, and they are forced to go on government assistance at taxpayer expense because the liable party cannot be held accountable for negligent acts.

The hypocrisy of Greg Abbott and his ilk.

Who can forget Governor Rick Perry begging for government funds after the private fertilizer company exploded in West Texas because of lax regulation? He wanted public dollars to bail out the damaged caused by the irresponsible act of a private company. Yet he refuses public ‘already paid in taxes’ dollars to expand Medicaid to help the poor.

Greg Abbott like many other Republicans continues their hypocrisy. They pass laws that adversely affect the working middle class and poor. Yet they ensure it does not affect them. That is their ideology. That is how they govern.