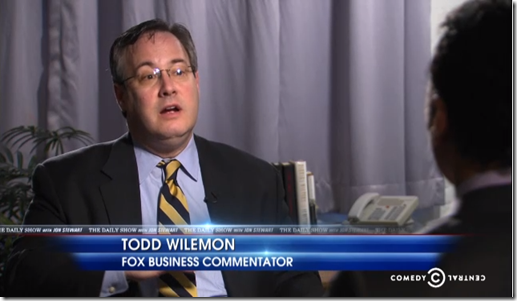 Aasif Mandvi of John Stewart’s Daily Show used his wit to force the truth out of Fox conservative business commentator Todd Wilemon. It was one of the smoothest take downs that left the professional in a fight for words.

“The US healthcare system is the best in the world,” said Todd Wilemon. “But now with Obamacare our choices have been limited. You know, people are going to be seeing this cost more. I am getting less. I am not going to be happy.”

Aasif Mandvi then asked for a worst case scenario.

“We have longer lines. You may have to bring your own sheets,” said Todd Wilemon. “In Russia they reuse syringes. The scenario where we could slip into Third World status would be slow, probably.”

Aasif Mandvi panicked. He decided to examine the Third World status Todd Wilemon was talking about. He travelled to a region riffed with poverty. He traveled with Stan Brock. Stan is the founder of Remote Area Medical (RAM). The organization provides free medical services to people in the third world unable to afford healthcare.

It turns out that RAM is now doing 90% of its work in the United States. Stan Brock said when he came to the states he saw the desperate need for medical care and hence the need for his services here. Aasif Mandvi categorically tells Stan Brock the US system is the best in the world. Brock’s reply was matter a fact. If you can afford it.

When asked to name five countries with better healthcare systems than the US, Brock ran off a litany of countries in excess of the five. It turns out the US is ranked 37th in the world.

Aasif Mandvi confronted Todd Wilemon with what he had found out without telling him that the place with Third World healthcare conditions was Knoxville, Tennessee. He told him the place he came back from had shockingly poor healthcare conditions. He said they were still reeling from the loss in the civil war. One quarter of the people are living in poverty. They have high rates of cancer and heart disease. How did Todd Wilemon respond to that?

“This is how bad it could get,” said Todd Wilemon. “if we keep going down the path of more government control, less innovation. I don’t know if we can be that place unless a great catastrophe happens in this country.”

Aasif Mandvi now makes his big reveal. He tells Todd Wilemon he is talking about Knoxville Tennessee. Todd Wilemon goes into a 13 second silent panic. The he responds. “People do fall through the cracks”

But it gets worse. He starts making comments like, everyone will get care but they may have to wait. Some people will get great healthcare while some will just get good healthcare. If you are poor, stop being poor. That is the healthcare system Todd Wilemon and his ilk want. That is what Obamacare fixes.

Check out the video below. It is very informative.

Todd Wilemon may consider watching the Fareed Zakaria fact based report that everyone should check out here. In the report Fareed Zakaria points out that Taiwan redid their entire healthcare system and used the American model to determine what not to do. They ended up with a single  payer system that kept the providers private. Obamacare is a few steps away from that but several yards away from the past failed model.