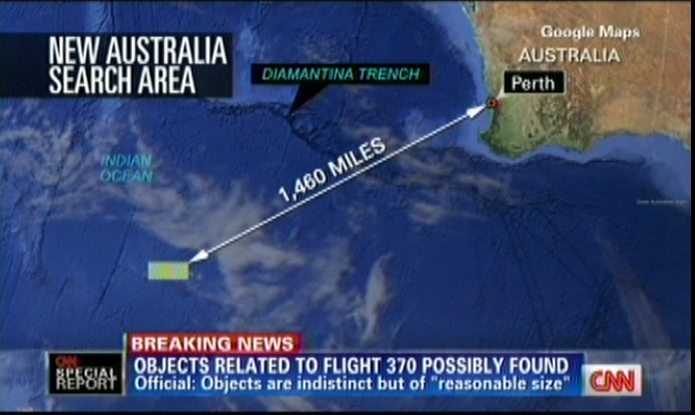 CNN is reporting that debris from Malaysia Airlines flight 370 may have been found. This post will be updated.

An Royal Australian Air Force Orion aircraft has already arrived in the area, John Young, general manager of emergency response for the Australian Maritime Safety Authority said, and another three aircraft are being sent there, including a New Zealand Air Force Orion and U.S. Navy P8 Poseidon.

An Australian C-130 Hercules plane has been tasked by Australian authorities to drop market buoys in the area, he said.
“The first thing they need to do is put eyes on the debris from one of the aircraft,” said aviation expert Bill Waddock. The buoys will mark the place and transmit location data.
The Malaysian Navy has six navy ships with three helicopters heading to the southern Indian Ocean to take part in the search, a Malaysian government source said.
The Malaysian military is checking the new information from Australian authorities, a source close to the investigation told CNN.
“Verification might take some time. It is very far and it will take some time to locate and verify the objects,” the source said.
Malaysia’s Acting Transportation Secretary Hishammuddin Hussein told CNN he couldn’t disclose the information the Australians shared with Malaysia. He said he hadn’t seen the images.
But he added, “Air and vessels are going there. You know how big the area is. Every lead is hope. We have been consistent with our process and we want to verify properly.”