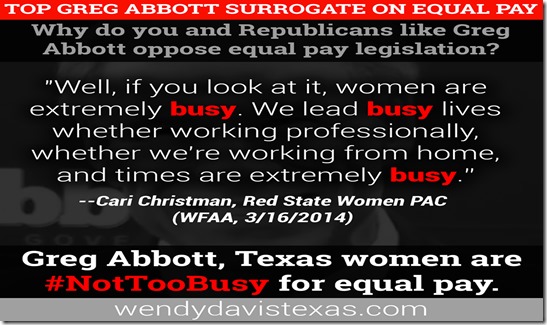 “We can’t afford a governor who defends this kind of business as usual,” said Rep. Howard.

Abbott has avoided answering questions directly.  But, yesterday, his campaign spokesman said that Abbott would would veto the legislation.  Earlier this week, his surrogates said that women are “too busy” and need to be “better negotiators.”

“The reality for women in Greg Abbott’s office: you can have the same title as a man, you can do the same kind of work as a man, but you will still earn less than a man,” said Garcia.

Rep. Howard made clear that “women are not too ‘busy’ to fight for economic fairness for all hardworking Texans — regardless of their gender.  I can assure you Wendy Davis is definitely not too ‘busy’ to sign the Texas Equal Pay Act the minute it hits her desk when she’s elected Governor.”

Abbott’s Surrogates on Equal Pay: Women are “too busy” and need to be “better negotiators”

Abbott Against Equal Pay for Women

“Abbott has voiced support for equal pay, but has not said whether he would have vetoed the state version of the federal Lilly Ledbetter law.” [Houston Chronicle, Peggy Fikac, 3.10.14]

“The limits of the federal protections are highlighted in a 2011 case in which the attorney general’s office, under Abbott, defended Prairie View A&M University in a state lawsuit brought by a professor who alleged discriminatory pay.” [Houston Chronicle, Peggy Fikac, 3.10.14]