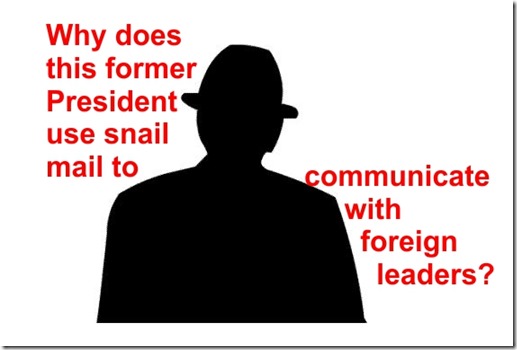 Andrea Mitchell aired an interview on Meet The Press with David Gregory today. The interviewee was former President Jimmy Carter. She asked the President about the NSA. A revelation he made was stunning. Here is a transcript of the snippet.

Andrea Mitchell : There’s been a lot of criticism about his policy regarding drones and the NSA surveillance. And the NSA, it has argued that this kind of intelligence gathering is critical to try to protect the American homeland.

President Jimmy Carter : That is being extremely liberalized. And I think abused by our own intelligence agency. … As a matter of fact you know, I have felt that my own communications were probably monitored. And when I want to communicate with a foreign leader privately, I type or write the letter myself, put it in the post office and mail it.

President Jimmy Carter : Yes because I believe if I send an email it would be monitored.

If a former President Jimmy Carter electronic correspondence in monitored, whose isn’t?

One can be sure that America is a surveillance state when a former president who shares the same party of the serving president is sure that a department under the Executive may be monitoring him. It is time to cleanup the NSA, CIA, and all of America’s covert agencies.