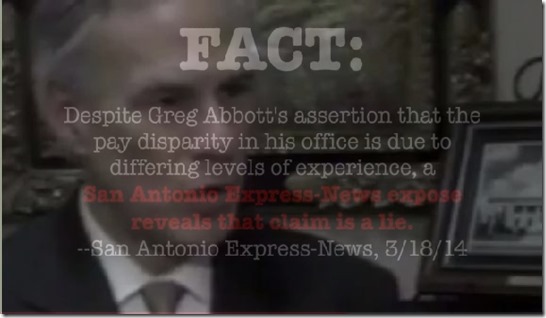 This is a very powerful ad that gets to the core of the apparent systemic equal pay violation present in the Greg Abbott Attorney General’s Office. Greg Abbott will have a hard time answering it. He claims there are already laws protecting equal pay for women. Yet, he underpays women in his office. Which law is he breaking given that women in his office are underpaid?

So which of those four laws is Greg Abbott breaking?

Fort Worth – After being cornered by San Angelo news media, Greg Abbott finally broke his 17-day silence on equal pay for equal work. He said that there are “four laws that are already in place to protect women in Texas.”

However, the San Antonio Express-News reported last week that Greg Abbott pays women approximately $6,000 less per year for doing the same work as their male co-workers.

So if there are already laws protecting women against pay discrimination: which of those “four” laws is he breaking?

“Greg Abbott says we don’t need equal pay for equal work because we have laws in place already,” said communications director Zac Petkanas. “If that’s true, and Greg Abbott is paying women less than men for the same work in his office, then which law is he breaking?”

In justifying the fact that women make less than men despite doing the same work — Abbott’s spokespeople have indicated that differing levels of experience account for the pay gap.  However, the San Antonio Express-News specifically refutes this, reporting:

“But drilling down into different classifications of assistant attorney general, the figures provided by Abbott’s office show there isn’t always a direct correlation between such experience and pay…In three categories, the women on average either had more years of service or had been licensed longer, or both, despite being paid less, according to figures from the attorney general’s office.”  [San Antonio Express-News, March 18, 2014]