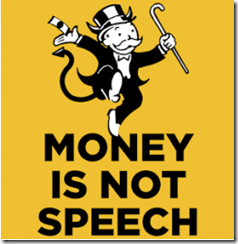 "Once again the Court has made its loyalties clear, and they lie not with the American people. The wealthiest individuals already have the power to finance campaigns and now the Court has made that even easier. We reject the Supreme Court's ruling in McCutcheon and call on the American people to build a movement to force Congress to overrule the Court through an amendment to the U.S. Constitution to make clear that corporations do not have Constitutional rights and money is not speech and campaign spending at all levels can be regulated."

"When the Court turns a political question like how to protect the integrity of elections into a Constitutional law question, it turns We the People from active participants to simply spectators in our so-called democracy."

"The only solution is to overrule the Court through a Constitutional amendment. Any attempt to solve the issue of money in elections through a regulatory or legislative fix is at the mercy of a Supreme Court and legal system only interested in protecting the interests of the monied few. It is time for Americans to Move to Amend. Washington DC can not be trusted to fix this problem for us -- it is in our hands."

Move to Amend is a rapidly growing national grassroots coalition of over 330,000 individuals and hundreds or organizations working to pass a constitutional amendment to state that Constitutional rights belong to human beings only, not to corporations and other artificial entities, and that campaign spending is not a form of protected speech under the First Amendment and can be regulated. The group formed in in 2009 in preparation for the Supreme Court's Citizens United v. FEC ruling on January 21, 2010.

Move to Amend national spokesperson David Cobb and National Director Kaitlin Sopoci-Belknap are both available for interviews with the press about the McCutcheon case. To arrange an interview, please contact press@movetoamend.org or call 707-269-0984.