The Congressional Budget Office (CBO) and the staff of the Joint Committee on Taxation (JCT) released an updated CBO report on the Affordable Care Act (Obamacare). It is much better than expected. It makes the lies that are continuously spewed about Obamacare even more incredulous and morally reprehensible.

The CBO report on Obamacare said the following.

Why does the CBO Report conclude the Obamacare numbers are improving?

The reductions in estimated federal costs are the net result of a combination of factors. The current projections:

President Obama has always made a moral case for affordable healthcare. He also made the case that unless the cost curve of healthcare was flattened, exploding deficits would continue. As the CBO Report shows, that curve is flattening. 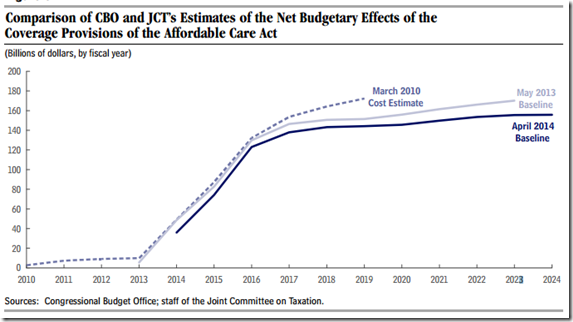 There is much more good news in the report. Specifically,

It was always known that if Obamacare was allowed to flourish, it would be mostly successful. After-all, it was successfully working in Massachusetts. Any big new social program will have problems that need fixing. Scrapping Obamacare instead of fixing any issues that arise would be fiscally and morally irresponsible,