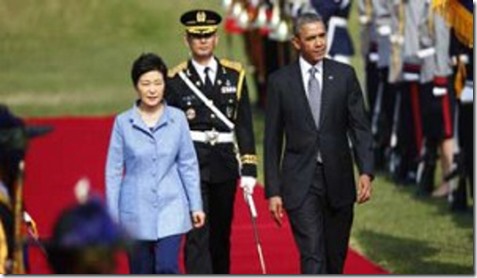 The South Korean ferry incident that occurred on April 16th has been all but hopeful. The ferry, called the Sewol, flipped over and sunk into the icy waters of the yellow sea, leaving no survivors behind. The ferry was carrying 476 people on board, most of them students that were from a high school near the capital of Seoul.

President Barack Obama, while visiting Seoul this Friday to pay homage to American military service, also paid tribute to the individuals who lost their lives aboard the Sewol:

“I’m very mindful that my visit comes at a time of mourning for the people of this nation,” Obama told the South Korean and U.S delegates. “As allies but also friends, we join you in mourning the missing, and especially the young people.”

Obama, alongside South Korean President Park Geun-Hye, proposed a moment of silence to honor the men and women who lost their lives in the ferry incident.

An American flag was offered to Park in a sign of sympathy for the loss of ““so many young people, students who represented the vitality and the future of this nation.”

“The Korean people draw great strength and courage from your kindness,” Park replied, “Just as the American people were able to rally together in the wake of the September 11 terrorist attacks, so, too, I am sure that Korean people will, in fact, pull through this moment of crisis and be able to achieve the renewal of the Republic of Korea.”

About the Author Chad Garza

Chad Garza is a freelance writer and a political specialist. Chad also enjoys writing about a wide variety of topics, ranging from health to inner city Houston news! Follow him on Facebook, Twitter, Google+ and LinkedIn to stay up to date on all the latest news in Houston and political happenings around the world!