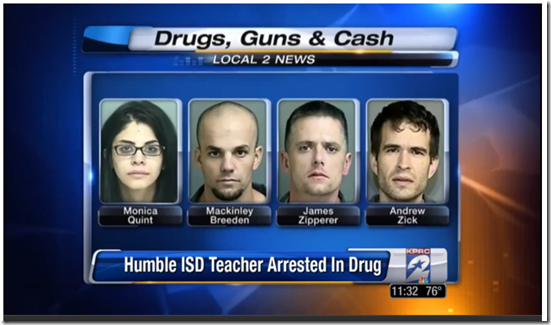 Yet another Texas teacher, Monica Quintero is in trouble with the law. This one is closer to home and seemingly much more dangerous. Guns, drugs, and teaching simply is simply not a good mix. KPRC reports the following.

Montgomery County Precinct 4 constable deputies said Monica Quintero, 31, was arrested early Wednesday morning at her home in Porter, along with three other men. Quintero has since been released from the Montgomery County Jail, but remains on administrative leave.

Deputies said they responded to a call for a foul smell coming from an apartment in the Villas of Valley Ranch Apartment Complex at 21899 Valley Ranch Crossing late Tuesday.

Investigators said once inside the apartment deputies found multiple types of drugs and needles, thousands of dollars worth of tools, including new unopened Dewalt, Dremmel and Kobalt tools, several Segway scooters and several weapons. Of the eight guns found, deputies said two of them had been reported stolen through the Houston Police Department.

Deputies said among the drug seized were 15 grams of liquid heroin, 101 grams of black tar heroin, 50 grams of GHB, commonly known as the date rape drug, and a large assortment of pills, including Adderall, Oxycontin and Xanax.